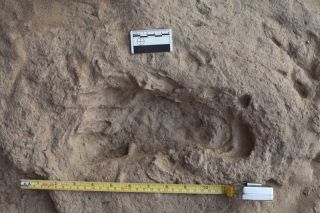 This 1.5-million-year-old footprint suggests that Homo erectus, an early human ancestor, had feet that were very similar to those of modern humans.
(Image: © copyright Kevin Hatala)

The human ancestor Homo erectus may have walked similarly to the way modern humans do today, new research shows.

In 2009, paleontologists discovered human-like footprints near the eastern shores of Lake Turkana in Ileret, Kenya. The fossilized tracks suggested similarities to modern human feet, including an arch, a rounded heel and a big toe aligned parallel with the other toes. But at 1.5 million years old, these prints were much too old to belong to Homo sapiens, or modern humans. They were attributed to Homo erectus, an early human ancestor.

Now, researchers think they know why there were so many similarities: Homo erectus may have walked like we do today. [Top 10 Things That Make Humans Special]

"Our analyses of these footprints provide some of the only direct evidence to support the common assumption that at least one of our fossil relatives at 1.5 million years ago walked in much the same way as we do today," study author Kevin Hatala, of the Max Planck Institute for Evolutionary Anthropology and George Washington University, said in a statement.

Whereas modern humans emerged only within the past 200,000 years, Homo erectus lived from about 1.9 million years ago to 143,000 years ago. The first fossil remains of Homo erectus, part of a skull, were discovered in Java, Indonesia, in the 19th century. Since then, scientists have discovered that Homo erectus was widely dispersed, with remains found from South Africa to Spain to Georgia to China.

Past research has shown Homo erectus might be the first human ancestor to have modern human-like body proportions; its long legs suggest it had adapted to walking and running on two feet, instead of climbing trees as its ape cousins do.

To learn more about the walking patterns of a species, a logical place to start would be an analysis of the feet, legs and pelvis. But in the case of Homo erectus, fossilized evidence of these features is scant. For example, only one collection of foot bones, found at Dmanisi, Georgia, has been attributed to Homo erectus. And even in that case, the taxonomic classifications of the Homo remains at Dmanisi have been debated. [In Photos: Amazing Human Ancestor Fossils from Dmanisi]

So the researchers in the new study used an experimental approach to study the footprints at Ileret.

When modern humans walk, they put most of the pressure on the inner ball of the foot and "toe-off" through the big toe and second toe. This motion leaves a distinct trace in footprints.

The researchers looked at the eight best-preserved trackways from Homo erectus, as well as the footprints of modern habitually barefoot people from the nearby Daasanach group. In most cases, the scientists found that these two sets of prints were "statistically indistinguishable," which might reflect similar foot anatomies and mechanics.

Hatala and his colleagues also estimated the body mass — and, based on that, the sex — of Homo erectus individuals from the Ileret tracks. According to this analysis, there were several adult males at each of the footprint sites. The researchers argue that finding implies some level of male cooperation, perhaps suggesting human-like social behaviors, such as sexually divided foraging.

"It isn't shocking that we find evidence of mutual tolerance, and perhaps cooperation, between males in a hominin that lived 1.5 million years ago, especially Homo erectus," Hatala said. "But this is our first chance to see what appears to be a direct glimpse of this behavioral dynamic in deep time."

The new study is detailed in the July 12 issue of the journal Scientific Reports.