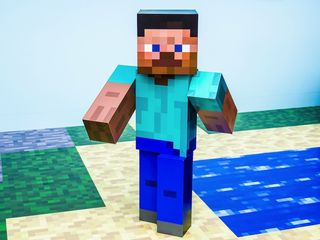 In the pixelated cube world of "Minecraft," players can create almost anything their hearts desire. Now, Microsoft is using the popular world-building game to build and test artificial intelligence in the fictional environment.

Microsoft has made a platform for artificial intelligence (AI) research using a modified version of "Minecraft" that will become available to the public following a limited release to select researchers. Project Malmo (formerly known as Project AIX) allows anyone from ambitious amateur coders to advanced computer scientists to build and test artificial intelligence in the "Minecraft" environment.

"WeꞋre trying to put out the tools that will allow people to make progress on those really, really hard research questions," Katja Hofmann, the project's lead researcher, said in a Microsoft blog post announcing the release. [Super-Intelligent Machines: 7 Robotic Futures]

Project Malmo isn't designed to build AI that solves specific problems. Instead, the research team hopes these tools will be used to develop a general artificial intelligence capable of "planning, reasoning, natural language, and learning," Hofmann told Live Science in an email.

In the standard "Minecraft" game, players are free to move about, interact with the world and build all manner of unusual creations block by block. An active community around modifications to the game persists years after its original release, and the great potential for creativity has even earned the game a place in the collection at the Museum of Modern Art in New York City.

The new project places a machine in control of the blocky avatar in the same open world, with challenges similar to what humans may encounter in the real world. The AI will have to learn the basics of "Minecraft," such as navigation, object interaction and creation, but there is potential for much more complex behavior, according to Microsoft. Human players have found "infinite variety in gameplay," Hofmann said, and research AIs could be put in the same situations.

The newest version also adds support for chat interactions with the AI "player," as well as the ability to overclock (speed up) the game, and therefore the pace of research, according to the developers.

Project Malmo is available on Github and will run on Linux, Mac OS and Windows. In the first few days following the release, close to 20,000 people viewed the project, Hofmann said. "If we are able to sustain a community of this scale, that would be hugely exciting," she wrote. "Our hope is to inspire the next generation of AI researchers and AI research."