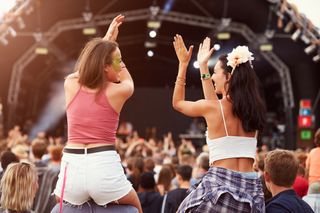 Your favorite bands aren't the only things that make headlines when summer music festival season is in full swing — each year, there are also news stories of people becoming dangerously ill and even dying at these events.

Indeed, summer music festivals can be a perfect storm of heat, dehydration and drug use that can lead to deadly consequences.

Live Science spoke to experts who are familiar with the effects of these drugs about what to watch out for this summer — and how to stay safe.

When it comes to drugs at these events, the biggest problem is ultimately the bad decision-making that goes hand-in-hand with drug use, said Dr. Lewis Nelson, a toxicologist and emergency medicine physician at New York University Langone Medical Center. People do things they wouldn't normally do, like taking too much of a drug, mixing substances or interacting with other people in ways they normally wouldn't, he said.

Dr. Ihsan Salloum, a psychiatrist and the chief of the division of substance and alcohol abuse at the University of Miami's Miller School of Medicine, noted that marijuana and hallucinogens, such as LSD and mushrooms, are also common at music festivals. [Trippy Tales: The History of 8 Hallucinogens]

Alcohol is also a major player in the health problems that people have at fests, Salloum told Live Science.

People at festivals often drink while they are using other drugs, Salloum said. Alcohol can reduce a person's normal resistance to other substances — in this way, it acts as a facilitator to using more drugs, he added.

And mixing alcohol with other drugs can lead to the formation of new compounds within the body, Salloum said. For example, if a person uses alcohol and cocaine together, the liver forms a substance that is a combination of the two that can actually be more toxic than either would be if they were used alone, he said.

Toxic compounds are also known to form in the body when people combine alcohol with opioids, and it's possible that other substances may form from other new combinations in the body, but few have been studied, Salloum added.

Heat, dehydration and other consequences

Despite the variety of drugs found at music festivals, what often ultimately kills people is overheating and becoming dehydrated, Nelson told Live Science.

At summer festivals, it's hot out, and people are dancing — a person loses a lot of fluid this way, Nelson said. But when you sweat out fluid, you're not just losing water, you're also losing electrolytes, such as sodium and potassium, he said. Things become dangerous when a person only replaces water and not electrolytes, because this can lead to life-threatening electrolyte imbalances, he said.

It's similar to running a marathon, Nelson said. Marathon runners need to replace both water and electrolytes during a race, otherwise they can get very sick, he said. Indeed, running around for several hours in the sun without replacing fluids is dangerous even without adding drug or alcohol use into the mix, he added.

For example, the heart can be affected by an electrolyte imbalance.

Potassium is an electrolyte that helps regulate the rhythm of a person's heart, Salloum said. If a person doesn't have enough potassium, he or she could develop rhythm problems in the heart, which could cause the heart to stop beating, he said.

And at a music festival, people who are already losing water and electrolytes may skip eating or drinking because they're so stimulated from drugs, he said. This can worsen the imbalance, and on top of that, taking stimulants can also raise body temperature — a condition called hyperthermia —  which is also very dangerous.

The combination of hyperthermia with an electrolyte imbalance can lead to serious problems with any organ in the body, including the brain, which can begin to swell, Nelson said. Indeed, when people at music fests die, they typically die as a consequence of multisystem organ failure, he said.

For example, Salloum said, here is one way things can go downhill: A combination of heat, dehydration and drug use can begin to break down muscles in the body (a condition known as rhabdomyolysis). As the muscles break down, the components of the muscle tissue enter the blood, and although these muscle components are eventually filtered out by the kidneys, they clog the kidneys' filters in the process, leading to kidney failure, he said. [7 Bizarre Drug Side Effects]

Delirium is also a serious problem, Salloum said. Indeed, many of the drugs that are used during music festivals can alter consciousness, he said. People talk about how certain drugs make music sound better, or lead to a "fusion between sounds and visuals," he said.

But when a person becomes confused and disconnected from reality, Salloum considers it an emergency. People go into what Salloum calls a "toxic delirium": they don't know where they are or what's going on, he said.

When to get help

There are several warning signs you can look for that suggest a friend or fellow concertgoer needs medical attention.

One major indicator that there is a problem is if a person stops sweating, Nelson said. If someone stops sweating when he or she should normally sweat, that's a suggestion that that person's body temperature is too high, he said.

But in most cases, many of the problems are things you can't see. You won't be able to look at what's going on inside a person's body, but you can look at his or her behavior, Nelson said. Ultimately, behavior and level of consciousness become the key markers, he said. Look for disorientation, sleepiness or loss of consciousness, he said. [5 Crazy Facts About Flakka]

"Superficially, people might look OK," he said. But if you are concerned with a friend's mental status, see if he or she can carry out a conversation, he said.

"Confusion is a major sign" that there is an issue, Salloum said. Even before major confusion sets in, if someone does not know where they are, "I would take them to an emergency room to make sure things don't develop further," he said.