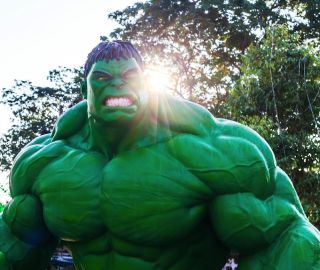 A new drug that gives people superhuman strength, but leads to violent delusions, is gaining attention.

The drug, which has the street name of Flakka, is a synthetic stimulant that is chemically similar to bath salts. Flakka is fast developing a reputation for what seem to be its nasty side effects, including a tendency to give people enormous rage and strength, along with intense hallucinations.

"Even though addicted, users tell us they are literally afraid of this drug," said James Hall, an epidemiologist at the Center for Applied Research on Substance Use and Health Disparities at Nova Southeastern University in Florida. "As one user recently reported, it's $5 insanity."

From what it is to how it may work, here are five facts about Flakka. [Krokodil, Molly and More: 5 Wretched New Street Drugs]

Flakka, which is also called gravel in some parts of the country, is the street name for a chemical called alpha-PVP, or alpha-pyrrolidinovalerophenone. The chemical is a synthetic cathinone, a category that includes the mild natural stimulant khat, which people in Somalia and the Middle East have chewed for centuries. Chemically, Flakka is a next-generation, more powerful version of bath salts. Flakka was banned by the Drug Enforcement Administration in early 2014.

2. What are its effects?

At low doses, Flakka is a stimulant with mild hallucinatory effects.

Like cocaine and methamphetamine, Flakka stimulates the release of feel-good brain chemicals such as dopamine and norepinephrine, Hall said. The drug also prevents neurons, or brain cells, from reabsorbing these brain chemicals, meaning the effects of the drug may linger in the system longer than people anticipate.

3. What are the dangers?

The danger comes from the drug's incredible potency. A typical dose is just 0.003 ounces (0.1 grams), but "just a little bit more will trigger very severe adverse effects," Hall told Live Science. "Even a mild overdose can cause heart-related problems, or agitation, or severe aggression and psychosis."

Because of the drug's addictive properties, users may take the drug again shortly after taking their first dose, but that can lead to an overdose, Hall said. Then, users report, "they can't think," and will experience what's known as the excited delirium syndrome: Their bodies overheat, often reaching 105 degrees Fahrenheit, they will strip off their clothes and become violent and delusional, he said. The drug also triggers the adrenaline-fueled fight-or-flight response, leading to the extreme strength described in news reports.

"Police are generally called, but it might take four or five or six officers to restrain the individual," Hall said.

At that point, emergency responders will try to counteract the effects of the drug in the person's system by injecting a sedative such as the benzodiazepine Ativan, and if they can't, the person can die, Hall said.

In the last several months, 10 people have died from Flakka overdoses, he said. (Users of PCP, Ecstasy, cocaine and methamphetamine can also experience the excited delirium syndrome.)

According to Hall's research, alpha-PVP is often purchased online in bulk from locations such as China, typically at $1,500 per kilogram. Doses typically sell on the street for $4 or $5, and because each dose is so tiny, that means dealers can net about $50,000 from their initial investment, as long as they have the networks to distribute the drug.

5. Why are we only hearing about it now?

Evidence suggests the illegal drug has only recently come on the scene. Crime lab reports from seized drugs reveal that seizures of alpha-PVP have soared, from 699 samples testing positive for the drug in 2010, to 16,500 in 2013, according to the Drug Enforcement Administration's National Forensic Laboratory Information System.

About 22 percent of the drug seizures that tested positive for alpha-PVP came from South Florida, according to the data.