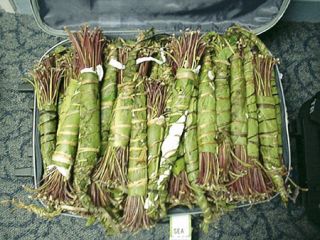 The British government has decided to ban the import and use of khat, after years of turning a blind eye to the herbal stimulant.

As recently as January 2013, the U.K. Advisory Council on the Misuse of Drugs had declared there is "insufficient evidence" that khat causes any serious health effects, the BBC reports.

The decision, announced today (July 3), has many outside the khat-using community wondering what exactly khat is, and why its use was allowed in the U.K. and elsewhere for so long. [Trippy Tales: The History of 8 Hallucinogens]

Khat is a flowering evergreen shrub native to East Africa and the Arabian Peninsula. The plant (Catha edulis) contains two alkaloids, cathinone and cathine, which act as stimulants.

Users simply chew the green khat leaves, keeping a ball of partially chewed leaves against the inside of their cheek (not unlike chewing tobacco).

The dried leaves can also be used in this way, though they have less potency. Some khat users also smoke the drug, make it into tea or sprinkle it on food.

Use of khat has been a tradition for centuries throughout Somalia, Yemen and Ethiopia, where khat cafes ("mafrishes") are often found. Khat leaves are chewed by students before exams, in the morning before work or at social gatherings, according to the Los Angeles Times.

The effects of khat (also known as qat, qaad, Arabian tea, kat and chat) are similar to those of other amphetamines, according to authorities like the Drug Enforcement Administration. Khat users report feelings of well-being, mental alertness, excitement and euphoria.

Though khat is generally described as a mild stimulant, there is consistent evidence of overuse and addiction. Long-term use or abuse has been linked to "insomnia, anorexia, gastric disorders, depression, liver damage" and heart attack, according to a 2009 study from the Austrian medical journal Wiener klinische Wochenschrift. [The 9 Oddest Medical Case Reports]

As immigrants from East Africa and the Middle East have settled in communities throughout Europe and North America, they have brought their tradition of khat with them, causing some friction between khat users and law enforcement officials.

In Canada, the United States and most of Europe, khat is a controlled substance, often placed in the same category as cocaine. Traditional users of khat, however, balk at that association.

"It is definitely not like coffee," Garrison Courtney, spokesman for the Drug Enforcement Administration, told the Times. "It is the same drug used by young kids who go out and shoot people in Africa, Iraq and Afghanistan. It is something that gives you a heightened sense of invincibility."

Indeed, many experts believe the drug is linked to violence in Somalia. A 2007 study from PLOS Medicine found that more than 36 percent of Somali combatants had used khat during the prior week — and khat use was believed to be even higher than that in some regions of the war-torn country, the study authors noted.

In Western Europe, there are concerns that the sale of khat is used to fund terrorism. Last year, the Huffington Post UK reported that every aspect of khat, from its cultivation to the mafrishes where it's sold and chewed, supports the al-Shabaab terrorist group in Somalia.

The U.K. ban on khat was initiated in part to prevent the country from becoming a center for smuggling khat to other countries where the drug has long been illegal.

"Failure to take decisive action and change the U.K.'s legislative position on khat would place the U.K. at a serious risk of becoming a single, regional hub for the illegal onward trafficking," British Home Secretary Theresa May said in a statement.

But the U.K. ban has met with some protest. "Prohibition is the most foolish possible response," Ian Dunt said on Politics.co.uk. "All the data on drug use shows that a ban does not eliminate demand, it merely forces the product underground."