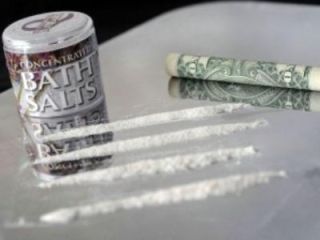 On Saturday in Miami, a naked, "zombielike" man viciously attacked a homeless man, biting off and eating much of his face. Police shot and killed the 31-year-old attacker, Rudy Eugene, who, according to some news outlets, may have been high on "bath salts" at the time of his cannibalistic attack.

But what exactly are bath salts?

These soothing-sounding substances are not what they seem. Manufactured in China and sold legally online and in drug paraphernalia stores under misleading brand names like "Ivory Wave," bath salts contain a bevy of newly concocted chemicals, such as methylenedioxypyrovalerone (MDPV), which aren't yet banned by the federal government. When snorted, injected or smoked, the synthetic powders can induce a state of paranoid delirium paired with abnormal strength, a combination that often leads to horrific acts of violence.

In short, "bath salts" actually do live up to the warnings of old-school anti-drug ads, which cautioned potential users of insanity, death and murder. The salts work by putting the brain's survival instincts into overdrive, essentially causing an extreme adrenaline rush that lasts for hours rather than moments.

MDPV, the active ingredient in "bath salts," increases the body's concentration of adrenalinelike hormones that prepare the heart, muscle tissue and the brain for the "fight or flight" response, explained Thomas Penders, an associate professor in the department of psychiatric medicine at East Carolina University. It does this by stopping neurons in the brain from reabsorbing the chemicals dopamine and norepinephrine immediately after secreting them, as would normally happen. This leads to a steady buildup of these neurochemicals, which trigger a person's primal survival behaviors, Penders told Life's Little Mysteries.

"One system of circuits in our brains are wired to detect and respond to threats. Overstimulation of this circuit leads to overestimation of actions by others as threatening. When the system becomes overwhelmed, as it does [from an overdose of] 'bath salts,' a condition develops known as 'excited delirium,'" he said. [Slideshow: Scientists Analyze Drawings by an Acid-Tripping Artist]

Overdoses of crack cocaine, methamphetamine, ecstasy and PCP can also induce "excited delirium." It's a state of paranoid fearfulness and rage mixed with seemingly superhuman strength, as more oxygen is delivered to muscles, increasing their power. "This, to some extent, explains the bizarre aggressive behaviors we have seen during the recent rash of 'bath salt' cases," Penders said. "[However,] I cannot imagine what the individual in Miami was perceiving to fully explain the vicious attack described there."

Even if no one else gets hurt, sufferers of "excited delirium" can wind up dead or in the emergency room, with medical complications such as cardiac arrhythmias, a spike in body and brain temperature, muscle breakdown and kidney failure.

While other drugs can lead to similar outcomes, one particular danger of "bath salts" is that there's no way to gauge how large a dose will trigger the effects, despite the product's appearance of manufactured consistency. Because the substances are not made in the U.S. or regulated for consumption, studies have found varying concentrations of the active compounds from package to package, said Patrick Kyle, director of clinical chemistry and toxicology at the University of Mississippi Medical Center. This leads to unintended overdoses.

"The user assumes that since one dose of ‘XYZ’ brand gave him/her a ‘rush’ with the last use, one dose will give the same effect," Kyle wrote in an email. "The user may unknowingly overdose on the same amount of product from the same 'brand.'"