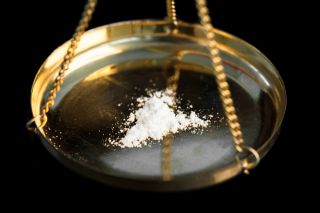 When it comes to altered states of consciousness, humans are nothing if not inventive. A number of new synthetic drugs, opiate painkillers and other substances have emerged recently as increasingly popular among partygoers and drug addicts. And some of these substances are alarming health experts and law enforcement officials.

Here's a look at five of the most potent of these street drugs.

Few street drugs have as wretched a reputation as desomorphine, a cheap derivative of codeine that's mixed with gasoline, oil, alcohol or paint thinner. Addicts shoot the concoction directly into their bodies with a hypodermic needle; the drug causes dark, scaly patches of dead and decaying skin. These gave rise to the street name "krokodil," or crocodile. [Trippy Tales: The History of 8 Hallucinogens]

While krokodil had previously been confined to Russia and former Soviet Bloc nations, a few cases of krokodil use have started appearing in the United States and other countries. Even those users who kick the habit are often severely disfigured for life, suffering serious scarring, bone damage, amputated limbs, speech impediments, poor motor skills and varying degrees of brain damage.

A little-known synthetic hallucinogen with only a brief history of use, 2C-P is reportedly a long-lasting and very potent drug. Its intense psychedelic effects don't begin until a few hours after a person takes it, but they can last for 10 to 20 hours, according to law enforcement officials.

At a concert in Middlebury, Conn., in September, four teenagers were hospitalized after collapsing almost simultaneously — police suspect 2C-P was the culprit, according to the Hartford Courant. "It was like a light switch went off," acting Middlebury Police Chief Richard Wildman said in a press statement. Officers used CPR and a defibrillator to treat a teenage male who had stopped breathing and had no pulse, the Courant reports.

Also known as amber, honey, wax, ear wax and by its initials BHO, butane hash oil is a highly concentrated form of the active ingredient in marijuana (tetrahydrocannabinol or THC). Use of BHO is known as "dabbing," because of the way the drug is ingested: Users place a small dab of the substance on a hot, metal surface, then inhale the resulting puff of smoke, according to SF Weekly.

The high is nothing like regular marijuana: It's not uncommon for people to lose consciousness after inhaling BHO. "Things like this never happened until the popularization of hash oil in recent years," Dale Gieringer of NORML, a marijuana advocacy group, told SF Weekly. "The dangers are dire enough to merit a special warning."

The active ingredient in the popular club drug Ecstasy is MDMA (3,4-methylenedioxy-N-methylamphetamine), and Molly is generally considered the most-refined, crystalline form of MDMA. A potent hallucinogen, Molly has been blamed for drug overdoses that killed four people this year, the New York Daily News reports.

One problem is the questionable purity of any synthetic drug, according to experts. "It's exactly the same phenomenon that occurred with Ecstasy a decade ago," Dr. Charles Grob, a professor of psychiatry and pediatrics at the UCLA School of Medicine, told the Daily News. "Ecstasy had terrible reliability, and it's the same with Molly. Though it's being marketed as pure MDMA, it's a hoax."

Buprenorphine, marketed as Suboxone, is an opiate painkiller that's often used to wean addicts off of more powerful opiates like heroin and hydrocodone. Substance abuse experts praise its success at treating addictions, and about 3 million Americans have used it for this purpose, according to the National Pain Report.

But a report from the Substance Abuse and Mental Health Services Administration (SAMHSA) found that the number of emergency room visits involving Suboxone had increased by a factor of 10 from 2005 to 2010. More than half of these visits were for recreational use of the drug. "The buprenorphine in these visits may have been misused or abused, either for psychoactive effects or in an attempt to self-treat for opioid dependence," according to the SAMHSA report.