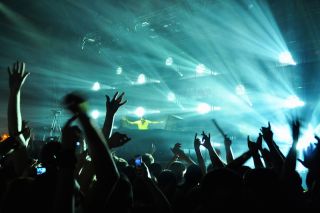 The drugs that people take at music festivals may leave a mark on the environment: A new study finds that levels of drugs such as ecstasy and ketamine may spike in a region's rivers after music events.

Drugs may pass out of a person's body in their urine or feces, and although the wastewater passes through treatment facilities, the process does not break down all chemicals, so some find their way into the local soil and water.

"The most interesting finding was the extraordinary increase," in the party drug MDMA (which is found in both ecstasy and Molly), the researchers wrote in their report on the drug levels in waterways in Taiwan before, during and after an event called the Spring Scream festival. Levels of ecstasy increased 10-fold during the event, compared with levels before and after, the researchers found.

The new findings add to the wider issue of what scientists call "emerging contaminants," which are the chemicals in medications and personal-care products that end up in the natural environment. Studies have found that even low doses of some of these chemicals, such as antianxiety drugs and the hormones from birth control pills, can affect the fish living in those contaminated waters.

In the new study, researchers measured the concentrations of chemicals in water samples from 28 rivers and two wastewater facilities in several cities in Taiwan, including the cities of Kenting and Hengchun, which are visited by an estimated 7 million tourists each year. The region covered in the study is especially busy in summer and in early April when Spring Scream takes place, attracting 600,000 music fans to the beach town of Kenting, according to the study.

The results showed not only increases in the levels of MDMA, but also increases in levels of caffeine, acetaminophen and ketamine (which is an animal tranquilizer that is also taken as a party drug), according to the study published today (Jan. 14) in the journal Environmental Science & Technology.

The results show that there is a high consumption of ecstasy during Spring Scream festival. This conclusion is also concerning because the drugs could potentially affect aquatic life, the researchers said. [7 Bizarre Drug Side Effects]

Over the course of a year, the lowest concentrations of most contaminants were detected in October, when there are not many tourists in the region, the researchers found.

The new results are in line with what previous research has found. For example, Super Bowl weekend in the United States has been linked with increased levels of drugs in nearby waterways, the researchers noted. Similarly, another study in Spain found higher levels of illicit drugs in the water during weekends compared with weekdays, as well as on the days after Christmas and New Year’s Day.