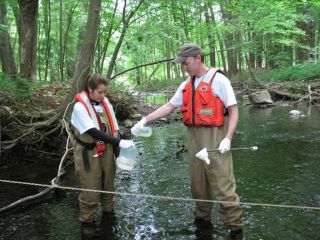 Muscle relaxants, opioids, and other pharmaceuticals are leaking into the environment at two wastewater plants in New York, a new study has revealed.

Water entering the streams from two wastewater treatment plants that are supposed to break down pharmaceutical manufacturing waste had concentrations of pharmaceuticals between 10 to 1,000 times higher than water released into the environment from 24 other plants across the nation that do not receive pharmaceutical waste, according to the study, which is detailed in the June 4 edition of the journal Environmental Science and Technology.

"I don't think anyone ever thought we'd see these concentrations in streams," said study author Patrick Phillips of the U.S. Geological Survey.

The study is the first in the United States to assess the environmental impact of wastewater treatment plants that process waste from drug manufacturing facilities. Pharmaceuticals were found at drinking water reservoirs as far as 20 miles (30 kilometers) downstream of one of the treatment plants that receives at least 20 percent of its waste from pharmaceutical manufacturers.

Health limits aren't established for these chemicals, and the levels detected are still rather low, but "if people are interested in keeping drugs out of the environment, this may be a source we haven't thought about before," Phillips told LiveScience.

The waste flows into the treatment plants from drug manufacturing facilities where multiple ingredients are combined to form final drug products and where products are packaged for distribution.

Pharmaceuticals have been measured in many streams and aquifers across the nation, but levels are generally lower than one part per billion (1 ppb) — about as much as a tablespoon of water in an Olympic sized swimming pool.

Concerns persist, however, that higher levels may occur in environmental settings where wastewaters are released to the environment. Recent reports of pharmaceuticals entering the environment when consumers flush them down toilets have received much attention, but not much work has focused on the wastewater treatment plants that process waste directly from the drug manufacturers.

At the plants that do not process the drug waste, maximum pharmaceutical concentrations in effluent samples rarely (about one percent) exceeded one part per billion. By contrast, maximum concentrations in effluents from the two treatment plants receiving drug waste were as high as 3,800 ppb of metaxalone (a muscle relaxant), 1,700 ppb of oxycodone (an opioid prescribed for pain relief), greater than 400 ppb of methadone (an opioid prescribed for pain relief and drug withdrawal), 160 ppb of butalbital (a barbituate), and greater than 40 ppb of both phendimetrazine (a stimulant prescribed for obesity) and carisoprodol (a muscle relaxant).

The researchers are now attempting to gauge the health impacts from these concentrations of pharmaceutical waste in the environment. One important concern is that the chemicals could build up in fish or other animals that live in these streams and then spread up the food web to predators of these animals, including humans — a process called bioaccumulation.