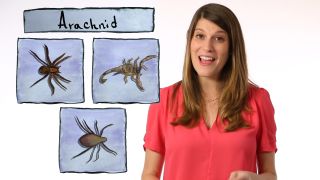 Anna Rothschild introduces YouTube viewers to the grosser side of science — like the tiny mites that live, eat and defecate on your face.
(Image: © Anna Rothschild)

Welcome to Live Science's exploration of science videos on YouTube!

In this series of stories, we're featuring some of YouTube's most popular channels, and looking at the different ways their creators use video and animation to tell science stories and share their unique perspectives on the world and how things work.

Science is often as disgusting as it is fascinating. Think of delicious cheeses that are teeming with bacteria, fungus that grows inside of living ants to create mind-controlled zombies, flowers that stink like rotting flesh and the liter (34 ounces) of mucus that your own body produces in a single day.

Yet as much as people may shudder at some of the sights, smells and textures produced by the world around them, and by their own bodies, it is only natural to be curious about these phenomena as well.

And at the junction where "icky" meets "intriguing" is the YouTube channel "Gross Science," created and hosted by Anna Rothschild and produced by Nova and PBS Digital Studios.

Rothschild makes videos about topics that are strange, fascinating and, yes, pretty gross. Want to hear about legless amphibians that eat their mothers' skin? How about exploring what herpes can do to your brain, or how dirty public restrooms really are? Don't worry — "Gross Science" has you covered.

It's all about the slime

Rothschild said her fascination with both science and grossness dates back to childhood, and she credits a slime kit given to her by her parents with sparking an early interest in becoming a biochemist. [Science Rocks: Best Educational Toys & Games for Kids]

"I thought that meant you got to make your own slime all day," Rothschild told Live Science.

Later, Rothschild said, she thought she would become an evolutionary biologist or a parasitologist, or both, but she soon realized that she much preferred talking about science compared to the day-to-day work she was doing in the laboratory. So she switched gears, turning her attention to video and animation production.

"I practiced a lot making my own videos," she said. Rothschild went to work at Nova, a TV series about science produced by the Public Broadcasting Station (PBS) network. She got her start with the digital team creating web videos, eventually becoming a producer and launching "Gross Science" on YouTube in 2014.

"I fell in love with science to begin with by doing gross experiments," Rothschild said. "This series was a no-brainer. It was the kind of content I always wanted to make."

Not everyone is grossed out by the same things, but many of Rothschild's viewers agree that her videos about eyeballs are "especially gross," she told Live Science.

However, personally, Rothschild finds her video about tonsil stones  — "balls of bacteria and food and waste products in our tonsils" — to be even more disgusting.

But the channel isn't just about grossing people out, she said. Rothschild explained that she also hopes her videos help people to confront and talk about subjects that may be considered stomach-turning but can also contain important lessons about what's going on in the human body.

"It's really important to talk about topics that are kind of taboo in our culture, especially for young people," Rothschild said, adding that middle-school teachers frequently show her videos in their classes.

"Kids should know that it's OK to ask questions about health and our bodies, and we should be comfortable talking about these things," she said.

What type of gross science will Rothschild share next? She wouldn't say, though she promised, "It will definitely be disgusting."