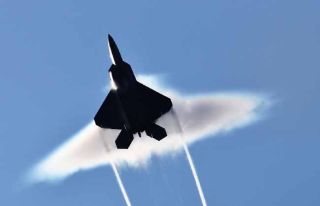 A U.S. Air Force F-22 Raptor aircraft participating in Northern Edge 2009 executes a supersonic flyby over the flight deck of the aircraft carrier USS John C. Stennis (CVN 74) while the ship is underway in the Gulf of Alaska on June 22, 2009. The visual effect is created by moisture trapped between crests in a sound wave at or near the moment a jet goes supersonic.
(Image: © DoD/Petty Officer 1st Class Ronald Dejarnett, U.S. Navy)

The breaking of the sound barrier is not just an audible phenomenon. As a new picture from the U.S. military shows, Mach 1 can be quite visual.

This widely circulated new photo shows an Air Force F-22 Raptor aircraft participating in an exercise in the Gulf of Alaska June 22, 2009 as it executes a supersonic flyby over the flight deck of the aircraft carrier USS John C. Stennis.

The visual phenomenon, which sometimes but not always accompanies the breaking of the sound barrier, has also been seen with nuclear blasts and just after space shuttles launches, too. A vapor cone was photographed as the Apollo 11 moon-landing mission rocketed skyward in 1969.

The phenomenon is not well studied. Scientists refer to it as a vapor cone, shock collar, or shock egg, and it's thought to be created by what's called a Prandtl–Glauert singularity.

A layer of water droplets gets trapped between two high-pressure surfaces of air. In humid conditions, condensation can gather in the trough between two crests of the sound waves produced by the jet. This effect does not necessarily coincide with the breaking of the sound barrier, although it can. To learn more, click here.

The aircraft carrier was participating in Northern Edge 2009, an exercise focused on detecting and tracking things at sea, in the air and on land.