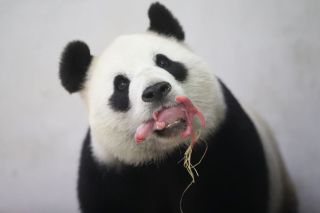 Add one more to the tally for giant pandas. A healthy male cub was born in a Belgian zoo yesterday (June 2), a rare event for the endangered species, of which there are barely 2,000 left in the wild.

Giant pandas are notoriously reluctant to mate in captivity. Following an artificial insemination from her mate, Xing Hui, 6-year-old Hao Hao gave birth to her first cub at the Pairi Daiza Wildlife Park, outside of Brussels.

"It's a boy!" founder and CEO of Pairi Daiza, Eric Domb, said during a news conference. "Everything went exceptionally well."

Hairless, blind and weighing just 6 ounces (171 grams), the unnamed cub was described as "a little pink sausage" by Tim Bouts, the park's zoological director, according to Reuters.

Immediately after the cub was born, Hao Hao scooped it up in her mouth, cleaned the wee one and held it close to her body, according to zoo staff.

The giant panda is considered at risk of extinction by the International Union for Conservation of Nature (IUCN). As such, "the panda is a true miracle," zoo officials said in a joint statement with the China Conservation and Research Center for the Giant Panda.

To give the dwindling wild population of pandas a boost, conservationists maintain more than 300 pandas in captivity — in zoos and breeding centers — around the world, though mostly in China, according to the Smithsonian National Zoological Park.

Austria and Spain are the only other European countries in the past 20 years that have been able to get pandas to reproduce with China's help.

"Even though we are incredibly happy, we must not forget that mortality rate amongst giant panda cubs is high in the first life year," Domb said in the statement. “We strongly believe that Hao Hao has all it needs to be a wonderful mother and we will do everything possible to ensure the survival of the cubs and give Hao Hao the best care."

The zoo has already begun making structural adaptations to provide new living spaces for the cub, Domb said. In addition, two Chinese experts from the China Conservation and Research Center for the Giant Panda are working with the zoo.

"This is only the third birth of a panda cub this year in the world," Domb said.