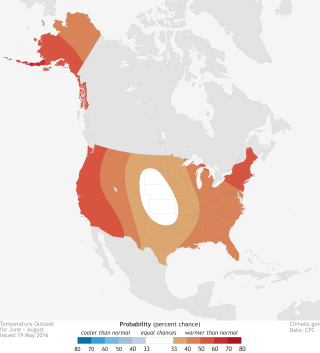 The western and northeastern parts of the U.S. have the highest odds (darkest red) for well above average temperatures this summer.
(Image: © Climate.gov)

It's likely to be a sweltering summer for most of the United States, according to the National Oceanic and Atmospheric Administration (NOAA).

In a continuing trend of 2016 being a warmer-than-average year, this summer could be a scorcher for a majority of the U.S., NOAA says.

NOAA's Climate Prediction Center released its summer outlook last week, which predicts above-average temperatures for the next season. Jon Gottschalck, a meteorologist with the Climate Prediction Center (CPC), told Live Science that the warmer temperatures are expected after El Niño, a climate cycle during which a band of warm water in the Pacific Ocean can impact global weather patterns.

"Typically, when you have a transition from El Niño to La Niña, there's generally warmer temperatures across much of the country, so that's one of the primary drivers," Gottschalck said.

The CPC also released a map that indicates the likelihood that a region will experience a hotter than average summer. The dark-red areas of the map represent the regions most likely to see a temperature jump. Alaska's Aleutian Islands have the highest chance of a particularly hot summer, according to NOAA. Only a small portion of the central U.S. is expected to have an average season (the white, oval-shaped area on the map).

Nebraska, Kansas and most of South Dakota — along with areas of Oklahoma, Colorado and Wyoming — will likely be spared from a scorching summer because these areas experienced more precipitation this year.

"A lot of the precipitation tends to produce high soil moisture content, and that can have a feedback into the longer-term climate system," Gottschalck said.

However, soil moisture will help keep temperatures in those areas level for only a few months; the entire country is expected to see continued above-average temperatures well into the autumn season, according to NOAA.

"That soil-moisture impact earlier in the summer — that will slowly abate unless more precipitation comes," which is difficult to predict at this time, Gottschalck said. "Right now, we're favoring above-normal temperatures through the fall across the entire country," he added.