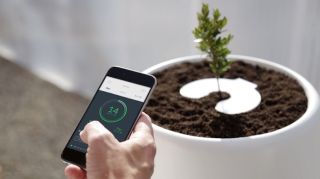 The Bios Incube is an incubator that monitors and cultivates trees from human ashes.
(Image: © Bios Urn)

Instead of keeping a departed loved one's ashes in an urn over the fireplace, why not breathe new life into them, in the form of a tree that can sit in your living room or outside on your porch? A new gadget helps you nurture life from ashes, and regardless of how green your thumbs are, it offers a way to keep loved ones close after they die.

The Bios Incube, created by the company Bios Urn, is an incubator that monitors and cultivates trees from human ashes in people's homes. The company says the invention allows people to return the deceased to life through nature, creating a living reminder of that person.

"When someone dies, they physically die, but the people who are around the deceased person still remember," said Roger Moliné, co-founder of Bios Urn. [Top 10 Weird Ways We Deal with the Dead]

The Bios Incube is a sleek, white plant pot that measures 2.5 feet (76 centimeters) tall and about 1 foot (33 cm) in diameter. The Bios Incube works with the Bios Urn, a biodegradable urn, and an accompanying mobile application. Although the Bios Urn has been available for more than a year, the Bios Incube is a new product designed for people who want to keep their trees close instead of planting them in a forest, Moliné told Live Science.

The Bios Urn is a relatively small cylindrical package with the seed and soil sitting on top of the ashes. The entire Bios Urn sits in the upper half of the Bios Incube and is supported from the bottom and around by soil. The Bios Urn is made of paper, carbon and cellulose. Once it decomposes, the ashes mix with the soil and roots of the tree, Moliné said.

The sensor is preprogramed to know what type of tree it is monitoring — for instance, whether it's a pine or maple. This means the device knows the exact moment the tree needs to be watered, Moliné said. Over- and under-watering are typically the main issues that affect tree growth, Moliné said, so the Bios Incube combines collected data from its sensors to determine when to water the tree. When the device detects dryness, the water pump automatically works to hydrate the soil. The Bios Incube's storage capacity of 3 gallons of water lasts 20 days on average, according to the company.

The sensor wirelessly transmits all its collected data through Wi-Fi to an application that can be accessed on a smartphone. The sensor can also use the internet to retrieve weather data to determine whether the plant should or should not be left outside, Moliné said, or whether a plant should be moved from one room to another.

The tree can stay in its pot or be planted in a forest, Moliné said. "If we keep a tree in a flower pot, the tree doesn't grow indefinitely," he said. If the tree is removed from the Bios Incubator and planted in the forest, the Bios Incube can be reused to plant another tree, Moliné said, even if the seed and soil don't come from the Bios Urn. The Bios Incube uses an ordinary soil mixture of coco peat, made from coconut husks, and vermiculite, a mineral used to retain water, the company said.

Bios Urn has received positive feedback from its users and the company maintains close relationships with its customers, Moliné said. The Bios Incube ran a Kickstarter campaign that raised more than $83,000, about $15,000 over their goal of $68,000, to market the Bios Incube. The Bios Incube is expected to ship out to early backers of the crowdfunding campaign in November, with the rest of the shipments estimated for March 2017.