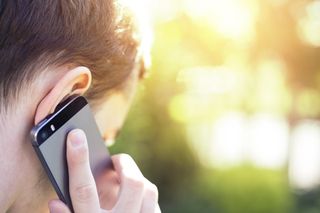 Long-standing debate has plagued the question of the link between cellphones and cancer. And while the jury is still out, a new study in rats shows possible evidence of a link between exposure and two rare cancers.
(Image: © guteksk7 / Shutterstock.com)

Federal scientists released partial findings Friday from a $25 million animal study that tested the possibility of links between cancer and chronic exposure to the type of radiation emitted from cell phones and wireless devices. The findings, which chronicle an unprecedented number of rodents subjected to a lifetime of electromagnetic radiation, present some of the strongest evidence to date that such exposure is associated with the formation of rare cancers in at least two cell types in the brains and hearts of rats. The results, which were posted on a prepublication website run by Cold Spring Harbor Laboratory, are poised to reignite controversy about how such everyday exposure might affect human health.

Researchers at the U.S. National Toxicology Program (NTP), a federal interagency group under the National Institutes of Health, led the study. They chronically exposed rodents to carefully calibrated radiofrequency (RF) radiation levels designed to roughly emulate what humans experience in their daily lives. The animals were placed in specially built chambers that dosed them with varying amounts and types of this radiation for approximately nine hours per day throughout their two-year lifespans.

“This is by far—far and away—the most carefully done cell phone bioassay, a biological assessment. This is a classic study that is done for trying to understand cancers in humans,” says Christopher Portier, a retired head of NTP who helped launch the study and still sometimes works for the federal government as a consultant scientist. “There will have to be a lot of work after this to assess if it causes problems in humans, but the fact that you can do it in rats will be a big issue. It actually has me concerned, and I’m an expert.”

More than 90 percent of American adults use cell phones. However, relatively little is known about their safety because current exposure guidelines are based largely on knowledge about acute injury from thermal effects, not long-term, low-level exposure. The International Agency for Research on Cancer in 2011 classified RF radiation as a possible human carcinogen. But data from human studies has been “inconsistent,” NTP has said on its website. Such studies are also hampered by the realities of testing in humans, such as recall bias—meaning cancer patients have to try to remember their cell phone use from years before, and how they held their handsets. Those data gaps prompted the NTP to engage in planning these new animal studies back in 2009.

The researchers found that as the thousands of rats in the new study were exposed to greater intensities of RF radiation, more of them developed rare forms of brain and heart cancer that could not be easily explained away, exhibiting a direct dose-response relationship. Some of the rats had glioma—a tumor of the glial cells in the brain—or schwannoma of the heart. Furthering concern about the findings: In prior epidemiological studies of humans and cell phone exposure, both types of tumors have also cropped up as associations.

In contrast, none of the control rats—those not exposed to the radiation—developed such tumors. But complicating matters was the fact that the findings were mixed across sexes: More such lesions were found in male rats than in female rats. The tumors in the male rats “are considered likely the result of whole-body exposure” to this radiation, the study authors write. And the data suggests the relationship was strongest between the RF exposure and the lesions in the heart, rather than the brain: Cardiac schwannomas were observed in male rats at all exposed groups, the authors note. But no “biologically significant effects were observed in the brain or heart of female rats regardless of modulation.” Based on these findings, Portier said that this is not just an associated finding—but that the relationship between radiation exposure and cancer is clear. “I would call it a causative study, absolutely. They controlled everything in the study. It’s [the cancer] because of the exposure.”

Earlier studies had never found that this type of radiation was associated with the formation of these cancers in animals at all. But none of those studies followed as many animals, for as long or with the same larger intensity exposures, says Ron Melnick, a scientist who helped design the study and is now retired from NTP.

The new results, published on website bioRXiv, involved experiments on multiple groups of 90 rats. The study was designed to give scientists a better sense of the magnitude of exposure that would be associated with cancer in rodents. In the study rats were exposed to RF at 900 megahertz. There were three test groups with each species of each sex, tested at different radiation intensities (1.5, 3 and 6 W/Kg), and one control group. (The lowest-intensity level roughly approximates the levels allowed by U.S. cell phone companies, which is 1.6 W/Kg.)  “There are only 90 animals per group, so because there is a trend and this is the purpose of these assays where you do multiple doses you extrapolate downward and calculate a risk for humans from those trends, so that information is useful. Probably what caused cancer at the high doses will cause cancer at lower doses but to a lesser degree,” Portier says.

Rodents across all the test groups were chronically exposed to RF for approximately nine hours spread out over the course of the day. During that time the rats were able to run around in their cages, and to eat and sleep as usual. The experiments also included both types of modulations emitted from today’s cell phones: Code Division Multiple Access and Global System for Mobile. (Modulations are the way the information is carried, so although the total radiation levels were roughly the same across both types, there were differences in how radiation is emitted from the antenna—either a higher exposure for a relatively short time or a lower exposure for a longer time.) Overall, there was no statistically significant difference between the number of tumors that developed in the animals exposed to CDMA versus GSM modulations. With both modulations and tumor types, there was also a statistically significant trend upward—meaning the concern increases with more radiation exposure. Yet, drilling down into the data, in the male rats exposed to GSM-modulated RF radiation the number of brain tumors at all levels of exposure was not statistically different than in control males—those who had no exposure at all.  “The trend here is important. The question is, ‘Should one be concerned?’ The answer is clearly ‘Yes.’ But it raises a number of questions that couldn’t be fully answered, ” says David Carpenter, a public health clinician and the director of the Institute for Health and the Environment at the University of Albany.

NTP released the partial findings on Friday after an online publication called Microwave News reported them earlier this week. NTP will still be putting out other results about the work in rats and additional findings about similar testing conducted in mice. NIH told Scientific American in a statement, “This study in mice and rats is under review by additional experts. It is important to note that previous human, observational data collected in earlier, large-scale population-based studies have found limited evidence of an increased risk for developing cancer from cell phone use.” Still, NTP was clearly expecting these findings to carry some serious weight: Ahead of Friday’s publication NTP said on its website that the study (and prior work leading to these experiments) would “provide critical information regarding the safety of exposure to radiofrequency radiation and strengthen the science base for determining any potential health effects in humans.”

Cell phone industry groups had not been briefed about the study findings before their publication, NIH said.  (CTIA, a cell phone industry group, declined to comment on the new findings.) The Federal Communications Commission, which had been briefed by NIH officials, told Scientific American in a statement, “We are aware that the National Toxicology Program is studying this important issue.  Scientific evidence always informs FCC rules on this matter. We will continue to follow all recommendations from federal health and safety experts including whether the FCC should modify its current policies and RF exposure limits.”

This animal study was designed primarily to answer questions about cancer risks humans might experience when they use phones themselves, as opposed to smaller levels of exposure from wireless devices in the workplace, or from living or working near cell phone towers. But it may have implications for those smaller levels as well, Portier says.

The findings shocked many scientists who had been closely tracking the study. “I was surprised because I had thought it was a waste of money to continue to do animal research in this area. There had been so many studies before that had pretty consistently not shown elevations in cancer. In retrospect the reason for that is that nobody maintained a sufficient number of animals for a sufficient period of time to get results like this,” Carpenter says.

Exposing rodents to radiation for this type of experiment is a tricky business. First, scientists need to be able to calculate exactly how much the rats should be exposed to relative to humans. Too much exposure would not be a good proxy for human use. And with finely calculated low-level exposure rates, scientists still need to be sure they are not going to heat the animals enough to kill them or to cause other health problems. (Subsequent work will be published on the animals’ temperature.)

There are safety steps individuals can take, Carpenter says. Using the speakerphone, keeping the phone on the desk instead of on the body and using a wired headset whenever possible would help limit RF exposure. "We are certainly not going to go back to a pre-wireless age,” he says. But there are a number of ways to reduce exposure, particularly among sensitive populations."