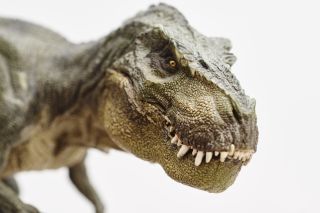 Meat-eating dinosaurs' teeth were long thought to stick out of their mouths like a crocodile's — but that might not have been the case.
(Image: © metha1819)

T. rex may have had lips. Yes, you read that right. Lips.

Robert Reisz, a paleontologist at the University of Toronto, is challenging the long-standing image of meat-eating theropod dinosaurs such as T. rex. Specifically, Reisz suggests that theropods' teeth were not bared all the time, extending outside their mouths and fully visible whether their jaws were open or closed. Rather, these teeth were kept hidden, covered by scaly lips, he said in a presentation May 20 at the Canadian Society of Vertebrate Paleontology's annual meeting in Ontario. [Gory Guts: Photos of a T. Rex Autopsy]

Reisz told Live Science in an email that he had always been bothered by the typical "permanent smile" portrayal of theropod dinosaur teeth. He first looked to the closest living relatives of theropod dinosaurs — crocodiles — for clues about tooth exposure.

At first glance, it could seem like the expectation for large theropods to have exposed teeth was on the right track. Crocodiles' teeth are covered by gums for about one-quarter of their length, but lips are absent and the tooth crowns are permanently exposed, Reisz explained.

However, if you look closer at tooth structure, a different story might emerge, he noted in his presentation.

The hard enamel of animals' teeth has low water content, and is typically kept hydrated by saliva. Without lips to keep moisture in and prevent the teeth from drying out, the tough enamel would become brittle and more prone to damage and wear, Reisz told Live Science.

Crocodiles live in watery environments and would rely on their habitat to keep exposed teeth hydrated. But land-dwelling theropods' large teeth — which are known to have enamel — could have been compromised by perpetual exposure, and likely needed to be covered by lips in order to stay moist, Reisz said in the presentation.

But crocodiles aren't the only animals with exposed teeth — elephants, for instance, have exposed teeth as well, and many extinct saber-toothed predators had very long canines that were also exposed when their mouths were closed. Wouldn't their teeth have been vulnerable to serious drying out, too?

Not necessarily. A mammal's tooth structure is actually quite different from a reptile's, said Zhijie Jack Tseng, a paleontologist who studies bite-force biomechanics in extinct carnivores at the American Museum of Natural History in New York City.

"Mammalian teeth are prismatic — they have a crisscrossing structure," Tseng told Live Science. He explained that when mammal teeth grow, the enamel emerges from the root area and "races outward in all directions," creating a 3D shape that may be better at keeping water inside.

In reptile teeth, the enamel grows in one direction, creating a different type of structure that may not retain water as effectively — potentially making their teeth more likely to chip or crack, Tseng suggested.

But for reptiles — and theropod dinosaurs — damaging or losing a tooth simply isn't as big a deal as it would be for a mammal, Tseng added. Mammals typically grow a set of baby teeth followed by a set of adult teeth, whereas reptiles — and likely many, if not all, dinosaurs — replace individual teeth throughout their lifetimes, scientists have found.

"Each tooth — relatively speaking — doesn't have as much value to the animal as in mammals," Tseng said. "T. rex could chip a tooth or get one stuck in prey, and just replace it. Evolving protection for teeth is not a critical component of how they eat."

The dinos, they are a-changin'

Reisz suggested in a statement that people may be reluctant to abandon the terrifying but familiar image of a "ferocious-looking" T. rex with bared teeth.

But now more than ever, scientists are challenging traditional ideas about how dinosaurs may have looked and behaved. New fossil evidence, computer modeling and comparisons with living creatures are helping scientists to paint a clearer picture of these extinct animals, overturning many historic conceptions of their postures, gaits, skin coverings and colors.

Long gone are the days when dinosaurs were almost uniformly pictured as grayish-green, ponderous reptiles with scaly skin. Contrary to their portrayal in popular films, dinosaurs are now widely accepted by scientists as having been covered in feathers, possibly in a range of colors, much like the colorful plumage of modern birds, which are a living dinosaur lineage.

Is it really so far-fetched to suggest that T. rex's toothy grin should also be relegated to the past? Time — and further research — will tell, Reisz said.