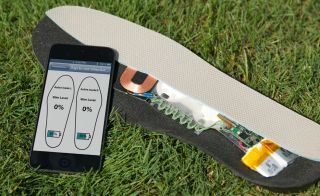 Insoles that electrically stimulate the feet with random vibrations that are too gentle to feel can affect a person's stride, and may boost stability, offering a potential new way to decrease the risk of falls and injury from balance loss, a new study finds.

Study participants undergoing strenuous activity while wearing such insoles adjusted their strides in a way that typically improves balance, the research found. The study was published online in the May 2016 issue of the journal Medicine & Science in Sports & Exercise.

The insoles work using a process called "stochastic resonance" (SR), a method for amplifying a weak signal by adding "white noise" across a spectrum of frequencies. The vibrations produced by the insoles may be imperceptible, but they provide a type of signal upgrade to the sensitivity of the user's sole, which translates into enhanced performance while walking. [7 Common Exercise Errors and How to Fix Them]

Earlier studies explored how this technique might be used to improve balance in elderly people. It's not surprising that such studies took place, said Daniel Miranda, the lead author of the new study and a Technology Development Fellow at the Wyss Institute at Harvard University in Massachusetts.

"Somebody who's 65 or 70 [years old] who's generally healthy may have some sensory deficits due to the natural aging process," Miranda told Live Science. It made sense that studies would investigate how this technology could help older people with decreased sensitivity recover some of what they had lost.

But, Miranda and his colleagues wondered, might there also be applications for young people?

In the years since the first experiments with this technique, the technology had progressed so that the actuators and sensors could be installed inside a thin, flexible insole made of traditional insole materials, which could fit comfortably inside a shoe. This meant the effects of SR could be tested during more dynamic activities than before, the researchers in the new study said.

The scientists examined subjects walking up an incline on a treadmill, and applied SR vibration through the insoles at different times during the task: before the people reached their maximum effort, during the peak of exertion and after they admitted fatigue. This was done to see what effect the stimulation might have on the participants' performance.

Since the pulses were too gentle to feel, walkers wearing the insoles had no way of knowing when they were receiving the vibrations, allowing the scientists to be certain that subjects were not consciously changing the way they walked.

The researchers found that whenever they activated the insoles, there was a 10 percent improvement in a gait mechanism called step-width variability, which is related to balance. Varying step width, Miranda explained, improves stability while walking.

Using the insoles to increase sensation for a more stable gait could be especially beneficial when fatigue reduces normal sensitivity to stimuli — for both recreational and professional athletes, he said.

And better balance, Miranda added, could keep people from getting hurt.

"Improving the balance-control mechanism has the potential to translate to reducing injury or risk of injury, but those studies still need to be done," he said.