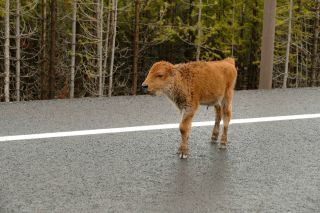 What began as a well-intentioned but ill-informed act ended with the death of a young wild animal recently at Yellowstone National Park. And the incident carries a sobering lesson for people tempted to "help" wildlife that they believe to be in distress.

During the week of May 9, visitors to Yellowstone came across a solitary bison calf. Thinking it was abandoned, they took the animal into their vehicle and transported it to a park station. Later, the newborn calf was released back into the wild, and the National Park Service (NPS) issued the visitors a citation, according to a statement from the NPS released May 16.

But after the calf was released into the wild, it was repeatedly rejected by its herd and was endangering itself by approaching people and cars on the road, according to Charissa Reid, a public affairs specialist with Yellowstone National Park. Reid told Live Science that park rangers made numerous attempts to reunite the calf with a nearby herd but were unsuccessful, and eventually had no option but to euthanize the calf. [7 Iconic American Animals]

Reid said that the park visitors who transported the calf found it in the middle of the road in an area where cell phone reception was poor and they were unable to contact park officials. When their efforts to move the calf off the road were unsuccessful, they placed the calf in their car — an illegal act — and drove it to a ranger station. Reid told Live Science that in spite of rangers' repeated attempts to return the calf to a herd close by, the calf kept coming back to the road, creating a hazard for itself and for people.

"It seemed to be very imprinted on people rather than on bison," Reid said.

On social media, many people expressed concerns that euthanizing the calf seemed like a drastic action, and in a Facebook comment, a Yellowstone National Park representative responded to numerous questions about why the calf had to be killed.

The NPS is not equipped to care for a calf that can't forage on its own, and sending the calf outside the park would require months of quarantine to observe it for signs of brucellosis, a highly contagious bacterial infection that affects domestic animals and people, the rep said. However, "no approved quarantine facilities exist at this time," the Yellowstone representative added.

Park regulations dictate that visitors refrain from contact with all wild animals as a safety measure. In the case of young animals, human contact also can lead mother animals to reject their babies. But even when humans are not involved, bison mothers — especially young ones — will sometimes abandon their calves, which then typically succumb to predators or to starvation, the Yellowstone representative noted.

And the NPS does not intervene in those circumstances either.

"Our goal is to maintain the ecological processes of Yellowstone," the representative said. And though it might be difficult for park visitors to accept, naturally occurring animal deaths are one of those processes, the rep added.

The bison was officially designated as the United States' national mammal on May 9, joining the bald eagle as both a symbol of the country and a representative of significant conservation achievements. Bison were hunted to near extinction during the 19th century, and by 1902, only two dozen free-ranging bison remained in Yellowstone, according to the NPS. Regulations and preservation initiatives were introduced to help the species recover, and their populations have rebounded: As of July 2015, there were approximately 30,000 bison in public and private herds in the U.S., with 4,900 wild bison in Yellowstone.

These shaggy bovines are unquestionably charismatic, but when they're encountered in a national park, they are best appreciated from a distance — at least 25 yards (23 meters) away, according to NPS guidelines. And that's not just for their own well-being — approaching wild animals can have deadly consequences for people as well, the NPS warned.

In 2015, five Yellowstone park visitors were seriously injured after approaching bison from unsafe distances. Three of those visitors were taking photos, and two of them reported having their backs to the animals at the time, according to a Morbidity and Mortality Weekly Report released by the Centers for Disease Control and Prevention (CDC) on March 24.

In the NPS statement, officials called for park visitors to show respect for wildlife and park regulations, which were created to protect both animals and people. This is especially critical for visitors to remember when considering approaching wildlife that appears to need help, which could put them or the animal in jeopardy.

"The safety of these animals, as well as human safety, depends on everyone using good judgment," the NPS said.