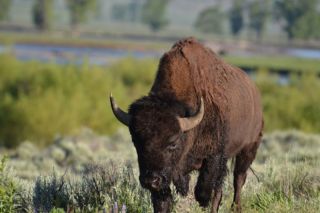 Yellowstone National Park has seen a rise in people getting injured by bison lately, and attempts to take selfies may be to blame for at least some of these injuries, according to a new report.

In the summer of 2015, five people were injured by bison in Yellowstone. That's more than the number of bison-related injuries seen annually in 2010 through 2014, when there were one or two injuries per year, according to the report from researchers at the Centers for Disease Control and Prevention.

Four of the people injured in 2015 were visitors to the park, and one was an employee. In three of the cases, people were injured when a bison tossed them into the air, and in the other two cases, a bison injured the individual with its horns. None of the injured died, although four needed to be hospitalized for their injuries, the report said.

All of the injuries occurred when people got too close to the bison. The iconic animals roam freely throughout the park, but they can be dangerous, and park rules prohibit visitors from coming within 75 feet of bison. Most of the people injured in 2015 were within 3 to 6 feet of the bison just before they got hurt, the report said.

Three people in the report were injured while taking photos. Two of these reported turning their backs toward the animal to snap their photos, and one admitted outright to trying to take a selfie, the report said. [Top 10 Most Visited National Parks]

The report noted that from 1980 to 1999, about 30 percent of bison-related injuries involved photography, and most of the people injured during that period were standing more than 10 feet from an animal.

But with today's smartphones, more people are taking photos and selfies, and because the devices don't zoom in very well, people may need to get closer than they did before. "The popularity of smartphone photography with its limited zoom capacity and social media sharing of selfies might explain why visitors disregard park regulations and approach wildlife more closely than when traditional camera technology was used," the report said.

Male bison can weigh up to 2,000 pounds, and females can weigh up to 1,000 pounds. Yet the animals are agile for their size, and can run up to 30 miles per hour. There were nearly 5,000 bison in Yellowstone in 2015, according to the National Park Service.

Educating visitors about the need to maintain a proper distance between themselves and wildlife is critical, the report said. "Injury prevention campaigns that identify and target the underlying motivations of visitors to not comply with viewing distances might prevent future injuries," the researchers, led by CDC epidemiologist Dr. Cara Cherry, wrote in their report.

Selfies have been blamed for deaths and injuries before. Last year, officials in Russia launched a campaign warning of the dangers of selfies after a number of selfie-related injuries and deaths occurred in the country, including one teenager who died while trying to take a selfie on a railway bridge.

The new report was published yesterday (March 24) in the CDC's Morbidity and Mortality Weekly Report.