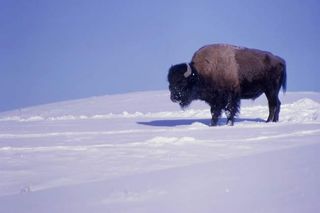 Bison in snow in Hayden Valley photographed in 1965.
(Image: © Bryan Harry via NPS)

Bison poop has more to offer than a field-clearing smell. Genetic analysis of the feces has revealed there are two breeding populations of bison in Yellowstone National Park, according to a new study.

The discovery has implications for how to manage the roughly 4,000 bison (called Bison bison by scientists), which were previously considered one giant breeding population within the park's boundaries.

“It takes crazy people like us to go out in the field and pick up poop from bison,” said lead scientist Flo Gardipee, a graduate student at the University of Montana. “But now we are getting some really important information regarding bison ecology out of it.”

While the study results are still preliminary and require further testing, Gardipee said having two breeding populations could help boost the overall genetic diversity of the bison [image].

The scoop on poop

Until now, scientists have relied on blood and tissue samples to extract DNA from bison. These methods involve handling the animals—which can weigh up to 2,000 pounds—and the use of tranquilizers in doses that are lethal to humans.

The poop-scooping method is less invasive. “We don’t have to round them up, rough them up or manhandle them in any way,” Gardipee said.

Gardipee and her assistant sampled poop from bison herds in Grand Teton, as well as from groups in Yellowstone’s Hayden Valley, Lamar Valley and Mirror Plateau. The scientists waited for one of the more than 100 bison to defecate. When the poop plopped and the animal wandered away, Gardipee went in to retrieve the sample. The animals didn’t always cooperate.

“Every now and then we have some fairly self-determined bison that just won’t move, and we end up not getting the sample,” Gardipee told LiveScience.

The poop itself doesn’t contain the DNA. When a bison chows down, the roughage scoots through the digestive tract before a less-recognizable chunk of it passes out of the gut. During the descent, cells lining the gut slough off and hitch a ride with the feces.

Gardipee looked at the transported gut cells and found DNA from mitochondria, the cells’ energy-making structures. This genetic material comes from females, so it can trace maternal lineages and, in this case, give information about breeding groups in bison.

If females were to plod back and forth between different groups of bison, the animals would all show similar mitochondrial DNA.

Instead, Gardipee found stark differences in the maternal DNA. In Hayden Valley, where 2,000 bison reside, and in Grand Teton, she found only one maternal line called haplotype 6. In Lamar Valley and Mirror Plateau, the more than 900 bison showed a different mix of mitochondrial DNA.

“This shows there is potentially a minimum of two different breeding groups in Yellowstone,” Gardipee said.

Tens of millions of the seemingly-ungroomed goliaths once roamed expanses of North America. In the 1800s, human settlers are thought to have hunted the bison to near extinction, with one report estimating a mere 25 bison left in 1894. Currently, up to 500,000 bison exist, with 95 percent under private ownership on ranches.

Since the late 1800s, cattlemen have cross-bred bison with cattle, resulting in a large number of hybrid bison.

“There’s been research done that has found widespread hybridization of those private herds and of cattle,” Gardipee said.

Last year, about 900 bison were slaughtered after they wandered out of Yellowstone because of fears they would spread an infectious disease called brucellosis to native cattle.

“No one knows, of the 900 animals that were sent to slaughter, how many came from each breeding group," Gardipee said. "If one breeding group is being culled disproportionately from another, we can lose lineages there. We can lose overall genetic diversity in the entire Yellowstone population.”