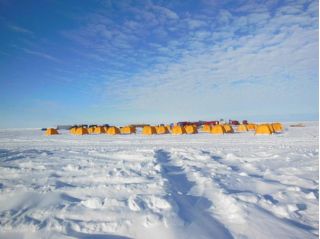 The subglacial Lake Whillans is starting to give up some of its icy secrets.
(Image: © WISSARD project)

Beneath the Antarctic ice is a world unlike any other. Cycles of freeze and thaw carve drainages, rivers, canyons and even lakes under what seems, from the surface, to be an endless expanse of white.

Now, researchers have drilled down into one of these hidden landscapes, subglacial Lake Whillans in western Antarctica. The lake is more like an under-ice wetland, researchers have found, 2,600 feet (800 meters) below the West Antarctic Ice Sheet. Scientists drilled into it using a warm-water drill in 2013. Publications of the results have been trickling out. They've revealed, for example, that some of Lake Whillans' water comes from an ancient ocean; the seawater was trapped in the lake after the last interglacial period. The project also revealed the first microbial ecosystem in a subglacial lake. (Subsequent drilling projects have bored into the grounding line where land meets sea under the ice, revealing crustaceans and pink fish.)

Tim Hodson, a doctoral student at Northern Illinois University, is one of the researchers studying sediments brought up from Lake Whillans. Hodson, his adviser Ross Powell and their colleagues are publishing a paper in the June issue of the journal Earth and Planetary Science Letters describing how water has carved the lake and its surrounding landscape. Previous studies have looked at the waterways beneath the Antarctic ice sheet, Hodson said, but the Lake Whillans project (conducted with funding from the National Science Foundation) is the first to directly access a subglacial lake. Hodson and his colleagues have found that the lake resembles a marsh, with shallow, slow drainages rather than rushing under-ice rivers. [Infographic: A Guide to Antarctica]

Live Science spoke with Hodson via email about the work and how scientists hope to learn more about Antarctica's mysterious underside.

Live Science: What is it like to drill sediment cores out of a subglacial lake?

Tim Hodson: It's a race against the clock. Our field season is tightly constrained by weather and flight availability. On top of that, we have to work quickly while the borehole is open, to deploy as many instruments as we can. Once the borehole starts to collapse (squeezing shut under the weight of the ice), we have to spend precious time and fuel to open it up again. We're left with almost no margin for error with the more complicated experiments. Not only are we working full tilt, in an unforgiving environment, but we only have one shot to get things right. It's exhilarating, almost like being in a pit crew or crewing a sailboat during a race. [Photos: Drilling into Subglacial Lake Whillans]

Live Science: Walk me through what this lake looks like. If you were to peel the ice off, what would you see?

Hodson: Much like on land, the bed of the ice sheet is a patchwork of different environments. There are lakes with different types of waterways connecting them, and areas where the ice sheet is frozen to the bed. I sometimes think of the ice-sheet bed as a wet desert — a desert in the sense that melting beneath the ice sheet only supplies a small amount of water, perhaps the equivalent of a few centimeters of rain per year. However, as there's no evaporation and little freezing, much of the bed remains wet.

Consequently, the Antarctic's subglacial hydrologic network is typically slow-flowing and much less powerful than the rivers we're familiar with on land. This contrasts with Greenland, where meltwater forming at the surface flows down to the bed through big, fast-flowing conduits. As it turns out, the abidance of water is extremely important to how the ice flows. If there's no water, the ice sticks to the bed. A little water lubricates the bed, allowing the ice to flow quickly. But add more water, and conduits start to develop, which drain the bed so efficiently that it starts to lose its lubricating effect.

Live Science: Were you surprised by any of your findings?

Hodson: I think everyone expected the subglacial lake sediment to be similar to the sediment in a regular lake on land. In hindsight, that seems a bit naïve, but that's the nature of working in an unexplored environment. As it turned out, subglacial lake sediments — and subglacial Lake Whillans, in particular — pose a number of challenges. For example, many standard techniques, like carbon dating, don't work under an ice sheet. In the end, we addressed the big questions we were after, but not in the manner we'd expected. It required a bit of creativity from the team, but that's part of the fun of scientific discovery.

Live Science: What did this study tell you about how the ice flows there?

Hodson: We've learned a great deal over the past few decades about how the ice flows, from satellite and aerial remote sensing. Meanwhile, theoreticians have been hard at work trying to explain how processes at the ice-sheet bed affect the ice flow above, but some questions can only be answered by directly accessing the bed. This work will help refine our theories about how the subglacial hydrologic network works, which, in turn, controls how the ice flows.

Live Science: What, if any, are the implications for climate change and sea level rise?

Hodson: We don't really know yet. For example, our work suggests the ice sheet is more sensitive to sea level rise than previously thought. Shrinking ice sheets raise sea level, which, in turn, causes ice sheets to shrink further. Realistically, other mechanisms, like ocean and atmospheric warming, probably have a bigger impact on the ice sheet than sea level. But in order to make accurate models, we need to put constraints on all of the processes that potentially affect the ice sheet. Especially when we're trying to forecast how the ice will behave over the coming decades to centuries, even these less important processes become important. Think of it like compounding interest: A few percent interest won't grow your investment overnight, but accumulated over a couple decades, it has a big impact.

Live Science: How do you integrate information from studies like this into models? With around 400 lakes under the Antarctic ice sheet, do you need sediment studies like this on all or many of them to start to build accurate models, or can you extrapolate from a few lakes?

Hodson: Integrating this sort of observational data into a model is a process of trial and error. Basically, it's up to the modeler to choose which processes to include in their model and how best to represent them. Oftentimes, we don't fully understand all the physical laws working in an environment, so we have to give our best approximation. This is true in almost all cases, so we need observations to help us assess whether our model is sound. At present, there's still a lot we don't understand about the ice-sheet bed, so we do want more observations. We certainly don't need to go drilling into every lake, but there are a number of big scientific questions that can only be addressed by accessing a few lakes in particular. The big question driving this project was just to get a first glimpse at the microbes living beneath the ice sheet and to understand how they survive.