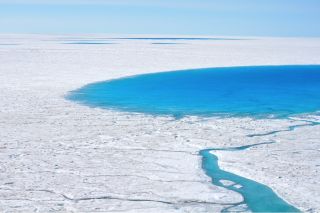 A supraglacial lake on the western margin of the Greenland Ice Sheet.
(Image: © Laura A. Stevens)

Geoscientists have solved a decade-long mystery of how some of the large lakes that sit atop the Greenland ice sheet can completely drain billions of gallons of water in a matter of hours.

In 2006, Greenland's North Lake, a 2.2 square-mile (5.6 square kilometers) supraglacial meltwater lake, drained almost 12 billion gallons of water in less than two hours. In a study published two years later, researchers determined that this astonishing phenomenon is possible because giant hydro-fractures(water-driven cracks) can form directly beneath the lake basin and stretch down to the bed of the ice sheet, emptying the lake of water. But just how these fractures developed has been unknown — until now.

In the new study, published today (June 3) in the journal Nature, scientists using GPS technology discovered that the hydro-fractures form from tension-related stress caused by movements of the ice sheet. These movements are, in turn, triggered by the trickling meltwater. [See Gorgeous Images of Greenland's Supraglacial Lakes]

The new research may help scientists better understand how much the ice sheet is contributing to sea level rise, researchers say.

Most of Greenland's supraglacial lakes drain slowly when superficial streams route water into nearby, permanent crevasses or moulins (vertical conduits or shafts in a glacier). Fairly recently, however, satellite images showed that about 13 percent of the lakes drain quickly, emptying completely within 24 hours.

"The images would show the lake there one day, and gone the next day," said first author of the new study, Laura Stevens, a glaciology doctoral candidate with the Massachusetts Institute of Technology/Woods Hole Oceanographic Institution (MIT-WHOI) Joint Program. "So we've known for the last 10 to 15 years that the water could disappear quickly."

The 2008 research, led by Stevens' co-author Sarah Das, a WHOI geological scientist, showed that temporary hydro-fractures could cause rapid lake drainage on an unprecedented scale. But that research was unable to determine what triggered the cracks in the first place. Two other, similar studies of different rapidly draining supraglacial lakes were also unable to identify what caused the hydro-fractures.

"The coverage of GPS stations was not dense enough," Stevens told Live Science. "This study goes beyond previous studies on the lakes, because we have 16 GPS stations, as opposed to one or four."

When meltwater in the summer drains to the bed from the ice surface through crevasses or moulins, it can cause the area within and around the lake basin to be "jacked up," Stevens said. Additionally, it can decrease the surface area of the ice-sheet bed that's in contact with the underlying bedrock, lubricating the bed and making it easier for the bed to move horizontally.

Placed around North Lake, the team's 16 GPS stations recorded these two types of movements — called uplift and slip — between 2011 and 2013. This provided an in-depth perspective on the meltwater injected into the bed before, during and after the yearly drainages.

"We found that before we get the main expression of the lake drainage, there is a period of time (about six to 12 hours) where uplift and slip increase," Stevens said. "That motion is enough to take the surface of the ice sheet and put portions of it in high tension that allows cracks to start forming."

The study provides a clearer picture of the amount and location of the meltwater that travels down to the ice-sheet bed, which could help scientists better understand how fast the ice sheet flows during the summer, Stevens said.

This is important because the inland ice that moves toward the coast gets funneled to so-called outlet glaciers, which are tonguelike protrusions that can break off to form icebergs that may drift off into the ocean and eventually melt.

"It's half of the equation of how the Greenland ice sheet contributes to sea level rise, with the other half being the years when the ice sheet melts quicker than the snow is deposited," Stevens said.