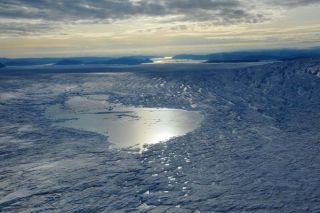 A lake of meltwater on top of the Greenland ice sheet.
(Image: © Konrad Steffen, University of Colorado)

As the Arctic warms, meltwater lakes on the Greenland ice sheet are draining to sea more frequently — potentially lubricating the slide of the ice sheet into the ocean.

These "supraglacial" lakes grow on top of Greenland's ice in the summer months. When the water pressure gets strong enough, it fractures the ice of the lakebed, creating a vertical "drainpipe" that carries water through to the bed of the ice sheet. New research finds this is happening more often, with catastrophic lake drainages occurring 3.5 times more often during the warmest Arctic years versus the coldest years.

"This if the first evidence that Greenland's supraglacial lakes have responded to recent increases in surface meltwater production by draining more frequently, as opposed to growing in size," said study scientist William Colgan, a research associate at the University of Colorado-based Cooperative Institute for Research in Environmental Sciences (CIRES). [A Gallery of Stunning Lakes]

Recent research suggests that under business-as-usual carbon emissions, the Greenland ice sheet will vanish in 2,000 years. If humans managed to limit global warming to 3.6 degrees Fahrenheit (2 degrees Celsius), the disappearance would take 50,000 years.

Using satellite imagery, Colgan and his colleagues monitored nearly 1,000 lakes on a portion of a ice sheet the size of Connecticut for 10 years. They found an uptick of lake drainages in warm years, each releasing an average of 1 million cubic meters of water into the ice sheet's underside within the span of a couple of days — enough to fill 4,000 Olympic-size swimming pools.

What's less understood is the effect of these drainages. The water could sluice down to the rock underlying the ice sheet, turning the surface slick and essentially putting the ice on a Slip 'N Slide toward the sea. The accelerated ice loss from that scenario would increase the predicted sea-level rise due to climate change.

But the water might also carve efficient sub-glacial paths to make its way to sea, making less water available for the ice-sheet slide and slowing sea-level rise, Colgan said in a statement.

"Lake drainages are a wild card in terms of whether they enhance or decrease the ice sheet's slide," he said. Future research will need to determine which scenario occurs so that both climate-change models and seaside communities can be better prepared in a warming world, Colgan said.

The researcher appears Monday (April 16) in the journal Remote Sensing of the Environment.