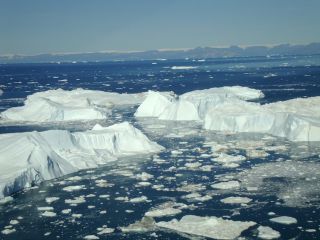 This photo shows icebergs floating at Jakobshavn, one of four glaciers that scientists typically use to predict how all 242 of Greenland's glaciers will melt. New research shows that the behavior of Greenland's vast ice sheet might be too complicated to capture using this method. As a result, scientists might be underestimating Greenland's ice loss.
(Image: © Beata Csatho)

Scientists looked at satellite data collected by NASA's ICESat spacecraft and Operation IceBridge and plotted the elevation of 100,000 sites on Greenland from 1993 to 2012.

The researchers were able to create new, more precise estimates for how much ice had melted in the past. They also found that the ice melts in a rather complex pattern, which should be of interest to scientists trying to predict how much ice will disappear in the future. [Images: Greenland's Gorgeous Glaciers]

More than a mile thick in most areas, the Greenland Ice Sheet covers nearly all of interior Greenland, an Arctic island about three times the size of Texas. If the entire ice sheet melted, sea levels around the world would rise about 20 feet (6 meters), according to the National Snow and Ice Data Center.

Though such a catastrophic scenario isn't likely to happen anytime soon, smaller increases in sea level could still boost the power of coastal storms, threaten to flood major cities and displace millions of people. During the 20th century, sea levels rose by about 6.7 inches (17 centimeters). According to the latest report from the Intergovernmental Panel on Climate Change (IPCC), the current scientific consensus is that sea levels could creep up by 11 inches to 38 inches (28 to 98 cm) by 2100, in part because of melting in the Greenland and Antarctic ice sheets.

The new research found that an average of 243 gigatons (or 66.5 cubic miles) of the Greenland Ice Sheet melted each year from 2003 to 2009. (The scientists had the most comprehensive data for this period.) That's enough meltwater to raise oceans by about 0.027 inches (0.68 millimeters) per year, the researchers said.

The study didn't make any exact predictions for how much of Greenland's ice may melt in the future, but the authors think that current models underestimate the extent of the problem.

"My personal opinion is that most of the predictions of this as far as Greenland is concerned are too low," study author Beata Csatho, an associate professor of geology at the University at Buffalo, said in a video statement.

Existing models for predicting changes in ice-sheet melt and sea-level rise are typically extrapolated from data on just four of Greenland's 242 glaciers: Jakobshavn, Helheim, Kangerlussuaq and Petermann. That's a problem, according to the study's authors, because glaciers — even ones right next to each other — can behave quite differently in any given year. Today's models also tend to ignore southeast Greenland's ice cover, which is experiencing heavy losses, the researchers found. In 2005, melting in this region accounted for more than half of the losses to the Greenland Ice Sheet.

Csatho and her colleagues say it's not easy to predict how glaciers will respond to global warming, because they don't always melt as the temperature rises. Their data showed that sometimes the glaciers covering Greenland thickened when the temperature rose, while some areas both thinned and thickened, with abrupt reversals.

To help other researchers create better prediction models, the scientists put all of Greenland's glaciers into seven groups, based on the characteristics of their melting behavior from 2003 to 2009.

"Understanding the groupings will help us pick out examples of glaciers that are representative of the whole," Csatho said in a statement. "We can then use data from these representative glaciers in models to provide a more complete picture of what is happening."

The findings were published Monday (Dec. 15) in the journal Proceedings of the National Academy of Sciences.