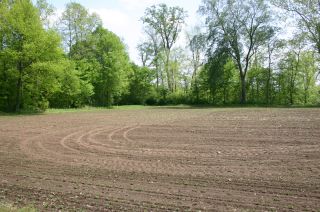 A curious prehistoric site on a hilltop in northern Ohio may reflect the spiritual cosmology of the ancient hunter-gatherer people who built the site around 2,300 years ago, according to a new study.

The so-called Heckelman site, located near the town of Milan, in Ohio's Erie County, is on a flat-topped bluff above the Huron River. There, people of the "Early Woodland" period of North American prehistory erected tall, freestanding wooden poles as part of the group's social or religious ceremonies.

Archaeologist Brian Redmond, a curator at the Cleveland Museum of Natural History, said the location of the site appeared to echo a conception of the cosmos common to many Native American peoples. [See photos of the prehistoric Heckelman site]

"We know that Native American and many different tribal groups had a very specific vision about the world as a three-layered cosmos: the upper world, the middle world that we live on and an underworld," Redmond, author of a new research paper on the earliest occupants of the Heckelman site, told Live Science.

The site is bordered by water, which ancient people could have seen as symbolic of the underworld, Redmond said. The wooden poles on the bluff may have been constructed to reach up to the sky, in the direction of the upper world, he added.

"So this could have been seen as a spiritually powerful landscape where you connected the three worlds together, with the poles as an 'axis mundi' (axis of the world) or 'tree of life' type of thing, which is global in the way that [ancient] cultures looked at these things," Redmond said.

The Heckelman site is unique among Early Woodland sites in the region because there are no signs of human burials or preparations for burials, Redmond said. Instead, the site seems to have been used for rituals or festivals associated with the living, rather than the dead, he said.

"From everything we're seeing, we're very certain it was some sort of ceremonial location. The fact we found no human burials, we found no evidence of mortuary treatment or mortuary ceremonialism — this site really stands out because we really didn't find any direct evidence of that," Redmond said. "So it's a different kind of ceremonialism, a ritualism related to the living — it represents that these people had a rich ceremonial life, a religious life, that wasn't just involved in burying people." [Top 10 Weird Ways We Deal With the Dead]

The unusual site features two parallel ditches that enclose the top of the bluff, and an oval ditch that encloses a flat area measuring about 87,000 square feet (8,080 square meters), where the wooden poles were erected.

None of the poles remain, but their locations can be determined by what's left of the "post molds," or pits, that were dug to hold the poles upright, researchers said. Judging by the size of the holes, the poles would have stood about 10 to 12 feet (3 to 3.7 m) tall, the researchers said.

"Unlike other sites where we have post molds, these don't represent the walls of a structure or a specific building. They seem to be freestanding, upright poles, which would indicate they had some different kind of function," Redmond said. "When I was looking at all the data and maps of the distribution of these poles, it's kind of a habit to try to make them into a structure, to look for rectangles or circles or something like a building, and I was really frustrated by the fact that I couldn't do that in the end. And then I realized, these are something else."

About six clusters of poles have been identified at the site so far. Each cluster may have been part of ceremonies held at the site at different times or by different groups of people, Redmond said.

"It really is very different than we've seen before," he added. "You do see poles in some Adena [culture] sites in southern Ohio, such as the circular arrangements of posts called a 'woodhenge' — sometimes these are found beneath Adena burial mounds. But that sort of regular pattern is something we're not seeing up here."

The Heckelman site, named after its private landowners, has been known since the 1950s, thanks to a large number of prehistoric artifacts found there by the landowners and amateur archaeologists. Those objects included pottery, spear points and knife blades. [In Photos: Human Skeleton Sheds Light on First Americans]

Excavations in the 1960s and 1970s found one of the parallel ditches on one side of the bluff top, and a geomagnetic survey in 2008 revealed the second ditch and oval enclosure.

Archeologists from the Cleveland Museum of Natural History and the Firelands Archaeological Research Center, in Amherst, Ohio, excavated parts of the site each summer from 2009 to 2014.

In addition to evidence of the freestanding poles, researchers found pits filled with pottery shards and burned rocks, which were likely the remnants of food that had been prepared as part of the ceremonies at the site, Redmond said.

"With analogy to historic Native American groups and others, it seems like these ceremonies would have also involved preparing food and communal meals, or feasting," he said.

The Early Woodland people were hunter-gatherers who lived in communities of a few families, and many of these groups likely used the Heckelman site, Redmond said.

"Their habitations were based on small groups of related families, but they did congregate in much larger groups for rituals or seasonal festivals," Redmond said. "It was probably a very social thing. They would come together to exchange information, to talk about where to get the best flint, or where did you see geese or ducks last season?”

And there may have been other social benefits, too, he said.

"They needed to interact, to get together and develop their social organizations and relationships, and these places were probably used for that," Redmond said. "So it is probably social [interactions], not just religion, going on at these places."

Redmond said the discoveries at the Heckelman site underline the importance of preserving archaeological resources in the United States. In many cases, doing so depends on the help of private landowners, he said.

"The father and son who maintain this property are very supportive of what we do. They have even gone so far in some years [as] to not even plant parts of the field that we wanted to excavate in," he said. "So we really just want to spread the word that there is really good evidence of the past all over North America, and that it is really important to preserve these sites."

The study was published earlier this year in the Midcontinental Journal of Archaeology.