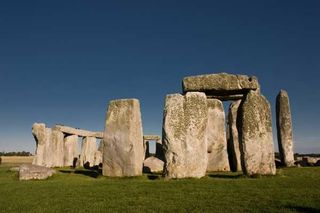 Scientists digging near the famous sandstone monument recently uncovered another circle of holes in the ground roughly half a mile away from the familiar grouping of stones.

What exactly these pits were used for, however, is still a mystery — much like Stonehenge itself.

The find could be a henge, or it could be something else entirely. A henge, or henge monument, is a circular embankment with an internal ditch surrounding a flat area of land.

The new find, about 2,950 feet (900 meters) outside Stonehenge, consists of a circle of pits, each about 3 feet (1 meter) wide, which have been filled with earth for a long time. The pits were probably dug to secure a circle of wooden poles, and may have been a wooden version of Stonehenge, archaeologist and member of the team that made the discovery Vincent Gaffney told the Associated Press.

"You seem to have a large-ditched feature, but it seems to be made of individual scoops rather than just a straight trench," Gaffney, of the University of Birmingham in England, told the BBC. "When you see that as an archaeologist, you just looked at it and thought, 'that's a henge monument' — it's a timber equivalent to Stonehenge."

The pits are a great find, said archaeologist Mike Parker Pearson of the University of Sheffield in England, who was not involved with the new discovery. But other than the date of these pits, scientists know too little about them to say how their discovery will change our understanding of the area, Pearson said.

"Despite the imaginative reconstruction drawings, no one has any idea if these were circles of posts, stones or just pits," Pearson told OurAmazingPlanet.

To get to the bottom of these pits, so to speak, archaeologists will have to do a little more digging.

"Until the site is excavated — which may or may not happen — it's difficult to fully assess its importance," said archaeologist Joshua Pollard of the University of Bristol in England.

If the find is in fact a henge, then its importance will depend on its exact date of construction and form, Pollard told OurAmazingPlanet.

The new find dates to sometime between the middle Neolithic and the middle Bronze Age (3,200 to 1,500 B.C.), Pollard said, so they can't rule out that the site is a Bronze Age barrow — a prehistoric tomb. These tombs are sometimes found with segmented ditches and post circles, Pollard said.

Researchers recently discovered the remains of individuals buried at Stonehenge and dated some of the bodies to almost 5,000 years ago — 500 years before the circular monument was built on top of the graves. More ancient Britons were buried at Stonehenge in the years following its construction, suggesting that the site was meant as a cemetery all along, probably for a ruling family.

Another recent discovery was of a pattern in the puzzling, horseshoe-shaped row of vertical columns at Stonehenge's center, which the researchers suggest was used to predict lunar eclipses.

Archaeologists say they keep finding new stuff at Stonehenge because of new techniques that can trace underground objects without disturbing the surface.

"Traditionally, archaeological fieldwork has been slow and expensive, and so rarely does the opportunity exist to undertake the sort of work we would like to do," Pollard said.

"The system that Vince Gaffney is using can cover in one day what would normally take a couple of weeks with conventional equipment, said archaeologist Timothy Darvill of Bournemouth University in England, who was not involved with the study.

"I'm sure there are lots more to find!" Darvill added.