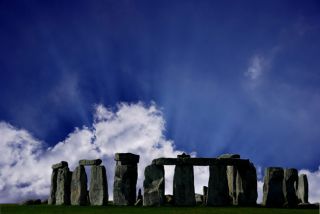 Like the pyramids, 5,000-year-old Stonehenge was built in a time when transporting 50-ton stones was no easy feat. No one knows who really assembled the site, but speculation is that it was meant as a sacred astronomical observatory.
(Image: © John Evans/Stock.XCHNG)

This year got historians and archaeologists all hot under the elbow patches, with important finds coming in from points across the globe. There was the great-grandfather of soul from Turkey and a true jaw-dropper in Spain, plus one little archaeological nugget that really hit the fan.  We've boiled down all the juiciest archaeology news to just the top five finds:

5. Ancients had soul If James Brown was the Godfather of Soul, then archaeologists from the University of Chicago found his great-great-great-great-great-grandfather in Turkey this year. Adorning an eighth-century B.C. funerary stone unearthed by the Chicago team was an inscription describing how the slab was made to commemorate Kuttamuwa — presumably an important official in his day — and was the final resting place of the deceased's soul. This seemingly simple statement is a rare Iron Age reference to the afterlife and may partly explain how the people of the area, who had considered cremation taboo in earlier times, eventually reconciled the practice by separating the body and soul. 4. Ancients had, uh, sole Maybe those people who treat their shoes like expensive works of art (and spend about as much money on them) have a point. Forty-thousand year-old toe bones discovered this year in China suggest that around the same time as early humans began creating elaborate art, at least some also started sporting footwear. The tootsies, belonging to a skeleton of indeterminate gender found in a cave, were much slimmer than the thick toes common to most of our ancient ancestors, indicating an individual who grew up wearing shoes rather than padding around barefoot.

3. Jaw-Dropper resets clock for first Europeans The confusing, spaghetti-plate map of early human migration got just a wee bit clearer this year with the discovery of a 1.2 million year-old jaw bone belonging to Homo erectus — a very early ancestor of Homo sapiens — in the mountains of Spain. The find pushes back the earliest known date for Homo erectus' arrival in Europe by a full 500,000 years and means the ancient species had more than 1 million years to toil about Europe (did they see museums? Visit some wineries, maybe?) before anatomically modern humans arrived from Africa and ultimately wiped them out.

2. Stonehenge is a domain of the dead And you thought it was just a boring bunch of slabs! Stonehenge, one of the world's most intriguing and recognizable sites, began as an important cemetery before its famous monoliths were even erected, new studies suggested this year. Analyzing the remains of individuals buried at Stonehenge, researchers dated some of the bodies to almost 5,000 years ago — 500 years before the circular monument was plunked down on top. More ancient Britons were buried at Stonehenge in the years following its construction, suggesting that the site was meant as a cemetery all along, probably for a ruling family.

The most interesting "artifact" of the year award is a piece of crap. Literally. When a pile of poop discovered in an Oregon cave in 2002 was retested this year thanks to new techniques in DNA extraction, excited researchers determined that the ancient feces — officially called coprolites in polite archaeological terms — were human and were more than 14,000 years old, marking the earliest evidence of human presence in North America by almost two thousand years. Other bits and pieces of cultural material have turned up in the Americas and called the date into question, but the coprolites are the oldest of definite human ... extraction.

Heather Whipps is a freelance writer with an anthropology degree from McGill University in Montreal, Canada. Her History Today column appears regularly on LiveScience.