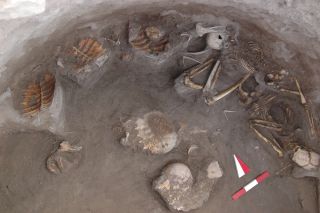 In an ancient settlement on the banks of the Tigris River in Turkey, archaeologists have made a strange discovery: 17 butchered soft-shelled turtles in the grave of a woman and child.

These river turtles were not a typical Mesopotamian menu offering 2,500 years ago, but the researchers think that, in this case, the animals may have been eaten in a funeral ritual before being buried with the dead.

The grave was discovered at an ancient mound site called Kavuşan Höyük, near the modern town of Bismil in southeastern Turkey. The archaeological record suggests the site was occupied for a very long time —from the late third millennium B.C. to the 14th century A.D.—but now, it's about to disappear. Once the controversial Ilisu Dam project is finished, Kavuşan Höyük and several other historic sites like Hasankeyf will be flooded with a new reservoir. [8 Grisly Archaeological Discoveries]

Ahead of this hydroelectric project, salvage excavations took place along the banks of the Tigris to save and study the archaeological materials that are soon to be underwater. At Kavuşan Höyük, digging took place from 2001 to 2009.

In the 2008 season, archaeologists discovered three ancient silos that had been dug into a mud floor dating back to the post-Assyrian period, around the sixth century B.C. These silos would have originally been used for grain or cereal storage, but one of them was repurposed for a grave. At the bottom of it, excavators found a woman and a child, buried directly on top of each other. Surrounding them were the carapaces (shells) and other skeletal remains of 17 Euphrates soft-shelled turtles (Rafetus euphraticus).

"It was really something unexpected," said Rémi Berthon, a zooarchaeologist at the National Museum of Natural History in Paris, who was tasked with studying the animal remains. Turtle shells —and, more commonly, tortoise shells —have been found in graves in the Near East before. But finding Euphrates soft-shelled turtles, and so many of them, was a surprise.

What's more, Berthon saw clear evidence that the turtles had been butchered. The cut marks on the bones suggest the turtles were placed on their backs and were cut open for the meat inside; their limbs were cut off as well, the researchers said.

Berthon said he hasn't tasted soft-shelled turtle meat himself, and he'd probably be in trouble with conservationists if he did: The Euphrates soft-shelled turtle is listed as endangered by the International Union for Conservation of Nature (IUCN). Despite its precarious status, the species was not held in much regard locally. Though ethnographic sources suggest the turtles are sometimes sold at fish markets, the animals have no economic function in the region today.

"I think that fishermen are not really happy with this species because they think they are too aggressive and destroy the fishing nets," Berthon said.

There is evidence from other archaeological sites that turtles and tortoises may have been seen as guides to the afterlife in some cultures. For example, the shells and skulls of green sea turtles were often found on graves at the Ra's al Hamra 5 cemetery, in Oman, which dates back to the fourth millennium B.C.

"We knew already that, in the Near East, the turtles and tortoise have a special role that is usually linked with life after death," Berthon explained. What's surprising here, he said, is that these special powers may have been applied to soft-shelled turtles, an overlooked animal today. As there are no marks of trauma or injuries, it's not clear how the two people buried with the turtles died. But the strange burial —and the evidence for a possible funeral feast —might also indicate that these two had high social status or symbolic status.

The findings were published online Feb. 17 in the journal Antiquity.