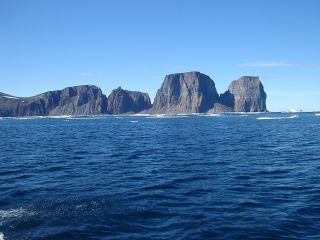 Materials from Earth's mantle that were created within the first 50 million years of the solar system's birth have been discovered.

In fact, the material — found within volcanic rock on Canada's Baffin Island and in a region near the Solomon Islands in the South Pacific — is about 4.5 billion years old, researchers said in a new study.

"The fact that these materials have survived through 4.5 billion years of dynamic Earth activity tells us something about the nature and limits of motion in Earth's interior, the source of flood [volcanic] basalt events and eventually about the processes that formed the Earth," said study co-researcher Richard Carlson, director of the Department of Terrestrial Magnetism at the Carnegie Institution for Science in Washington, D.C. [Photo Timeline: How the Earth Formed]

The Earth, which formed between 4.5 billion and 4.6 billion years ago, took shape as matter surrounding the young sun began to clump together. The heat of this matter coming together made the developing orb melt, and Earth soon separated into two main layers: an iron metal core on the inside and a silicate-rich mantle on the outside.

For years, researchers thought that the early mantle had been destroyed as it melted and mixed into other, newer rock. But now, new chemical analyses show that some of it survived in rock formations called flood basalts, which were created by enormous lava eruptions.

These lava rocks are only 60 million to 120 million years old, but some of the material within them contains pieces of the early mantle, the researchers found.

To investigate, the researchers looked at different isotopes within the ancient lava flows. (Isotopes are variations of an element that have different numbers of neutrons.) In particular, they looked at isotopes of tungsten, an element that's commonly used in the filaments of incandescent light bulbs.

Tungsten has especially useful isotopes, the researchers said. When an isotope of the element hafnium (hafnium-182) undergoes radioactive decay (that is, gives off radiation), it creates tungsten-182. Hafnium-182 went extinct within less than 50 million years after the formation of the solar system, about 4.567 billion years ago, Carlson said.

Moreover, it takes about 9 million years for hafnium-182 to decay into tungsten-182, making it a good measure of extremely old rocks, Carlson said.

After much research, the team found basalt on Baffin Island from a 60-million-year-old volcanic eruption, and basalt on the Ontong Java Plateau (just north of the Solomon Islands) from an approximately 120-million-year-old volcanic eruption. Both of these basalts had slightly more tungsten-182 than younger volcanic rocks, they found. [In Photos: The World's Oldest Living Things]

The researchers were able to measure these small differences in tungsten-182 thanks to improvements made to mass spectrometers, tools that can measure the mass of an element. (Because isotopes have a different number of neutrons, each isotope has a unique mass that the mass spectrometer can detect.)

"We have only had the ability to do this for about a decade," Carlson told Live Science in an email. "And in that decade, we are getting a much clearer picture of the events that occurred over the first tens to hundreds of millions of years of Earth history."

The study was published online today (May 12) in the journal Science.