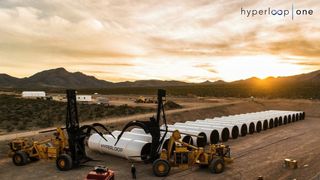 Hyperloop One is developing a futuristic transportation concept known as the "Hyperloop," which was first proposed by SpaceX and Tesla founder Elon Musk in 2013.
(Image: © Hyperloop One)

A futuristic transportation concept known as the "Hyperloop" is undergoing the first public test today of one of its key components — an important milestone for the pioneering system first envisioned by SpaceX and Tesla founder Elon Musk.

The test is meant to signal the start of work on an actual Hyperloop transportation system, which was proposed by Musk in 2013. The concept would see people zoom between Los Angeles and San Francisco in only 30 minutes, sitting inside pods that speed through low-pressure tubes at roughly 760 mph (1,220 km/h). [Photos: Elon Musk's Superfast 'Hyperloop' Transit System of the Future]

Hyperloop One is performing the propulsion open-air test on a 0.62-mile (1 km) track at the Apex Industrial Park in north Las Vegas. The test comes days after a competing company, Hyperloop Transportation Technologies, announced that it will license a technology dubbed passive magnetic levitation for use in transportation systems. (There are several companies working on Hyperloop concepts, but none of them are affiliated with Musk or his companies.)

In 2013, the co-inventor of the Superconducting Maglev transportation system (which propels trains at high speeds using magnets to create lift and propulsion) told Live Science that there are limitations to the Hyperloop concept.

"It's doable, but you have to build a track or tunnel that's very straight," American physicist James Powell told Live Science at the time. "At that speed, the track has to be straight and flat, to avoid bumpiness. When you're going 600 miles per hour, you can't really go around curves, and you'd have to be very flat, because without causing excessive g-forces, you probably wouldn't be able to adjust to changing elevations rapidly."

Yesterday, Hyperloop One also announced that it had received $80 million in financing, from current and new investors, to develop the transportation system.

"The brightest minds are coming together at the right time to eliminate the distances and borders that separate economies and cultures," Shervin Pishevar, Hyperloop One co-founder and executive chairman, said in a statement.

Hyperloop One further announced several privately funded feasibility studies. One will be for container shipments between the California ports of Long Beach and Los Angeles; another is within Switzerland; and the third will investigate possible routing between Stockholm, Sweden, and Helsinki, Finland, the company said. Hyperloop One will accept competitive proposals up to Sept. 15, and the winning proposals will be selected in March 2017, company officials said.

In 2015, Musk signed a deal with central California landowners to build a 5-mile (8 km) test track along California Interstate 5. This summer, SpaceX plans to test some of the most promising Hyperloop prototypes at its own track in Hawthorne, California.