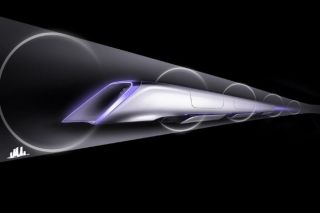 This image of a Hyperloop capsule is one of many designs that could be put to the test on the proposed Hyperlook track.
(Image: © Elon Musk/SpaceX)

The Lone Star State could soon be the new testing ground for the most futuristic transportation system in the world.

On Jan. 15, Tesla Motors and SpaceX CEO Elon Musk announced a preliminary plan to build a test track for the Hyperloop, his proposed high-speed transport system, in Texas. Musk first revealed the idea for this "fifth mode of transportation" (i.e., not a car, train, plane or boat) in August 2013. Since then, the billionaire entrepreneur has been fairly tight-lipped about how the project is coming along.

But during a speech at the Texas Transportation Forum on last week, Musk said he is planning to build a 5-mile (8 kilometers) track to test prototype versions of the pods that could one day travel the Hyperloop at speeds of up to 760 mph (1,220 km/h). After the announcement, Musk tweeted that the track will likely be built in Texas and will be "for companies and student teams to test out their pods." [Photos: Elon Musk's Super-Fast 'Hyperloop' Transit System of the Future]

Musk says the Hyperloop is a great solution for traveling between congested cities that aren't very far apart (no farther than 900 miles, or 1,450 kilometers apart, to be exact). The transport system could get passengers from Los Angeles to San Francisco in just 30 minutes, according to Musk, who outlined the basic design of the system in a paper posted to the SpaceX website in August 2013.

Details about exactly how this futuristic transit system will work are still fuzzy. The system could be an updated version of the Very High Speed Transit System that was originally developed by the Rand Corporationin the 1970s. The research institute proposed sending capsules propelled by electromagnetic waves through evacuated, or airless, tubes in underground tunnels. Others have guessed that Musk's technology could be an altered version of the Lofstrom Loop, also known as a launch loop, a system for launching objects into space using electromagnetic acceleration that was originally conceived of in the 1980s.

In Musk's paper outlining the Hyperloop, he suggested one possible design could be "some enlarged version of the old pneumatic tubes used to send mail and packages within and between buildings."

Since Musk proposed his idea for the Hyperloop in 2013, at least one group of futuristic travel enthusiasts has stepped forward to design the infrastructure that would make such a transit system possible. Hyperloop Transportation Technologies Inc. was formed not long after Musk posted his ideas about the system on SpaceX's website.

The company consists of about 100 engineers from all over the world who spend their days working for organizations like NASA, Boeing and SpaceX and their nights brainstorming ideas for the Hyperloop, according to a report by Wired. Students at the University of California, Los Angeles, are also working with the company to make the Hyperloop a reality.

Together, seasoned engineers and students are trying to figure out the best location for the transit system (they're not sold on Musk's Los Angeles-to-San Francisco route). They’re also designing the capsules that could carry Hyperloop travelers at super-high speeds, Wired reports.