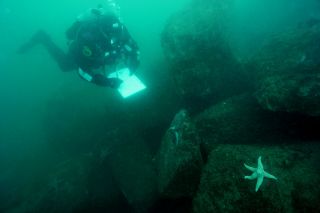 For the past two years, a mysterious wasting disease has devastated starfish living along the West Coast, turning countless individual animals into goo. But now, a record number of surviving starfish babies is giving some researchers reason for cautious optimism.

The Oregon coast currently has a thriving community of juvenile starfish (or sea stars), with some places seeing populations with as many as 300 times the typical number, researchers said. That's welcome news, as up to 90 percent of sea stars in Oregon showed signs of the deadly wasting disease from June to August 2014, reports a new study published May 4 in the journal PLOS ONE.

The high starfish numbers don't mean the deadly disease is gone, however, the researchers said. Another round of the wasting illness could kill the juvenile sea stars, including the purple ochre (Pisaster ochraceus), known as a "keystone" species because of its influence on the marine ecosystem, the researchers said. [In Photos: Sick Sea Stars Turn to Goo]

"When we looked at the settlement of the larval sea stars on rocks in 2014 during the epidemic, it was the same or maybe even a bit lower than previous years," study lead author Bruce Menge, a professor of marine biology at Oregon State University, said in a statement. "But a few months later, the number of juveniles was off the charts — higher than we'd ever seen."

The juvenile starfish aren't the result of elevated starfish births or a massive re-settlement. Rather, these particular sea stars "just had an extraordinary survival rate into the juvenile stage," Menge said. The big question is "whether they can make it into adulthood and replenish the population without succumbing to sea star wasting disease," he said.

Perhaps this generation had a high survival rate because there was more food available, the researchers said. After the wasting disease killed off the majority of adult starfish, the young sea stars would have had more mussels and barnacles to eat, the scientists said.

Cause of sea star wasting

The wasting disease left innumerable starfish with twisted arms that eventually disintegrated into slimy ooze. The epidemic spanned from Alaska to Baja California and also sickened sea stars on the East Coast.

But it's anyone's guess what causes the disease, scientists said. Some attribute it to sea star-associated densovirus, and others said warmer waters triggered the disease's spread. But the new study found no association between water temperatures and the epidemic in Oregon, Menge said.

Interestingly, researchers at Cornell University in New York found evidence of densovirus in sea stars, the water column and marine sediments. The virus occurs naturally, but may become harmful to starfish experiencing stress, the researchers said.

"Something triggered that virulence, and it happened on a coast-wide basis," Menge said. "Ocean acidification is one possibility, and we're looking at that now. Ultimately, the cause seems likely to be multifaceted." [Marine Marvels: Spectacular Photos of Sea Creatures]

Several clues provide hints about the disease. Sea stars that were continuously underwater, including those in tide pools, were more likely to die than were sea stars living on rocks that were usually above water, the researchers found.

Also, adult starfish were more likely to die than juveniles, probably because the older individuals had been exposed to the wasting disease for a longer period of time, the researchers said.

Menge and his colleagues have studied sea star habitats for more than 30 years. The loss of these creatures has already thrown the ecosystem out of whack, the researchers said. For instance, during the past two years, there has been a population boom in gooseneck barnacles, likely because adult sea stars weren't there to prey on them, the researchers said.