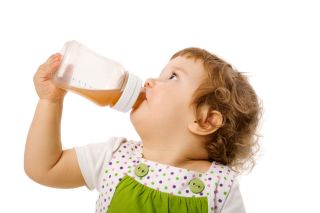 For young children with a mild "stomach bug," drinking diluted apple juice may be just as good as more expensive drinks that tout having electrolytes for preventing dehydration, a new study suggests.

The study involved nearly 650 children in Toronto, ages 6 months to 5 years, who went to the emergency room with diarrhea and vomiting, but were only mildly dehydrated. The children were randomly assigned to receive either diluted apple juice or an apple-flavored drink with electrolytes while they were in the ER.

"In many high-income countries, the use of dilute apple juice and preferred fluids as desired may be an appropriate alternative to electrolyte maintenance fluids in children with mild gastroenteritis and minimal dehydration," the researchers, from the University of Calgary in Canada, wrote in a paper published online today (April 30) in the journal JAMA. [10 Ways to Promote Kids' Healthy Eating Habits]

The new findings challenge the recommendation from the Centers for Disease Control and Prevention to routinely give children an electrolyte solution if they have diarrhea. But this recommendation was based on a smaller study conducted nearly two decades ago.

It's been thought that drinks with a lot of sugar increase diarrhea, but recent studies (including the current one) suggest that, for children with minimal dehydration, consumption of any fluids is more important than the sugar content of the fluid, the researchers said.

The researchers noted that the new findings may not apply to lower-income countries, where children have a higher risk of complications from gastroenteritis.