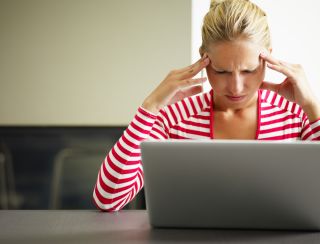 Being even slightly dehydrated is enough to cause moodiness, problems concentrating, headaches and fatigue, a new study has concluded.

Researchers controlled levels of hydration in 25 women, and measured the effects on mood and cognition to make the link. While other studies have looked at the consequences of severe dehydration, this is the first time milder dehydration has been examined.

"These are the levels of dehydration that would be more relevant to our daily lives," said Harris Lieberman, a research psychologist at the U.S. ArmyResearch Institute of Environmental Medicine who led the new study.

The article will appear in the February issue of The Journal of Nutrition.

Lieberman recruited 25 women between ages 20 and 25 to participate in three days of testing over three months. On one day, the women exercised, and the researchers gave them sufficient water to replace the fluid lost through sweat. On another day, the researchers gave the women smaller amounts of water after exercise, inducing slight dehydration. And on the third test day, the women not only exercised without sufficient water, but also took a diuretic pill.

The women did not see the exact amounts of water they were drinking, or how much water weight they'd lost while exercising, Lieberman said.

Despite not having these clues as to their hydration state, the women who weren't sufficiently hydrated after exercise scored lower on questionnaires assessing mood. They also reported feeling that it was harder to get work done on those days, said Lieberman, as well as having more headaches, fatigue and confusion than they did on the day they were sufficiently hydrated.

The research team did a separate study in men, which is not yet published, that found similar effects.

"The critical point here is that if you want to maintain your mood at optimal levels, you need to maintain your hydration," Lieberman said. "These levels of dehydration are not extreme, and could occur in normal life."

The Institute of Medicine recommends that women consume 2.7 liters, or 91 ounces, of water each day, and that men consume 3.7 liters (125 ounces) daily. But water doesn't just come from beverages — many fruits, vegetables or prepared foods contain water that can contribute to this daily intake.

But these recommended values are just an average, said Ann Grandjean, a nutrition researcher at the University of Nebraska Medical Center.

"There are so many factors that can cause a person to become dehydrated," Grandjean said. "Some people running or walking at the same pace as others will sweat much more. And the climate you live in can have a huge effect."

The new research, she said, can help understand how these requirements vary between people, and how to recognize the signs of early dehydration.

"The research has moved from focusing on professional and college athletes, to now trying to evaluate the potential impact of dehydration on the average person," she said.

For most people, letting thirst guide their water intake will keep them sufficiently hydrated. But keeping fluid nearby when exercising is key to keeping hydrated, she said.

Pass it on:  Staying hydrated — especially after exercise — is key to maintaining a good mood, an ability to concentrate, and warding off headaches.