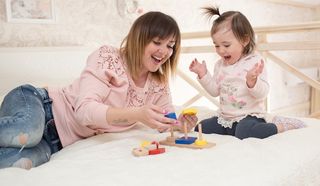 Parents can help improve their child's attention span in a very simple way: by paying attention to the toy their child is playing with, a new study suggests.

Researchers found that when parents looked at a toy and showed interest in their 1-year-olds as they played with it, the infants paid attention to the toy for a longer time, even after the parents shifted their attention elsewhere, according to the findings, which were published today (April 28) in the journal Current Biology.

The study shows that a young child's attention span can be changed by the real-time behaviors of parents, said Chen Yu, a professor of psychology and brain science at Indiana University in Bloomington and the lead author of the study. If parents join their child in paying attention to a toy, the child will likely pay attention to the object for longer than they would if parents didn't show any interest in it, he said.

The results reveal that social interactions between a parent and an infant can influence the development of the child's attention span. Attention has often been viewed as a property of an infant's brain that is not influenced by those around them, Yu said. However, this study proved otherwise. [10 Scientific Tips for Raising Happy Kids]

In the study, the researchers looked at 36 parent and infant pairs. The parents and the infants wore head-mounted devices that tracked the gaze of their eyes during a play session.

The gaze data showed that when parents turned their visual attention to a young child who was playing with a toy and interacted with the infant, a parent's responsiveness extended the amount of time a child remained focused on that toy.

The researchers found that in situations where the parent and the 1-year-old paid attention to the same toy for about 4 seconds, the 1-year-old's attention lingered on this object for another 2 seconds, even after the parent turned his or her gaze elsewhere.

Over time, the few seconds of attention gained by daily, early-in-life social interactions between a parent and an infant may help strengthen pathways in the child's brain involved in sustaining attention and concentration, the researchers said.

Further research is needed on this topic, Yu said. One future direction is to explore how a parent's behaviors influence the development of a child's attention in the long term, he said. [9 Weird Ways Kids Can Get Hurt]

Another important area of research is to study attention in children with autism, who have a limited attention span, Yu said. If these new findings can be applied to these children, then additional work may focus on developing specific ways in which parents could interact with their child with autism on a daily basis to help train the child's attention, Yu said.