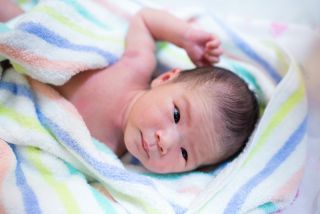 A stock photo of a newborn baby.
(Image: © Phattana Stock/Shutterstock)

A newborn's gaze may hold clues to how he or she will behave a few years later, new research suggests.

In the study, researchers looked at 80 newborns, who were just 1 day to 4 days old, and measured how long the babies focused their gazes on images that were being shown to them. Then, when the children were 3 to 10 years old, their parents filled out questionnaires about the kids' temperament and behavior.

Overall, the babies who gazed for less time also had more behavioral problems in childhood, according to the study.

"We were … struck that differences between newborns in their visual attention predicted how the children would behave when they were older," said study author Angelica Ronald, an associate professor at Birkbeck, University of London.

The investigators said they don't know what mechanism might link babies' visual attention with their behavior in childhood, but the scientists would like to explore this question next.

The researchers also said they were surprised to find such big differences among the babies in terms of how long they looked at the images, Ronald said. "This shows us that newborns are not 'blank slates,' but already show clear differences between one another," she said. [10 Scientific Tips for Raising Happy Kids]

These differences between babies so young are likely due to genetics or the environment the children experienced within the womb, she said.

"For anyone interested in the role of nature and nurture, it shows that children's ability to attend to things visually is not all due to parenting or environmental effects after birth," Ronald told Live Science.

Researchers have known that conditions that cause people to have a difficult time paying attention, such as attention deficit hyperactivity disorder, are partly heritable, she said. So it's reasonable that there would be differences among individuals in the ability to pay attention at any age, she said. However, more research is needed in this area, she said.

And even if people's attention styles do depend on genetic factors, it's still possible that there are ways for people to learn to increase their attention spans, Ronald said.

Moreover, the researchers stressed that one type of attention is not universally better than another. Although having a very short attention span may impede a person's learning, "a degree of variation between people is what makes us thrive at different things," Ronald said.

"It may be why one person succeeds as a racing car driver, where rapid visual attention changes are needed, and another person excels at something like fine art, where extended concentration on visual stimuli brings most benefit," she said.

The new study was published today (June 26) in the journal Scientific Reports.