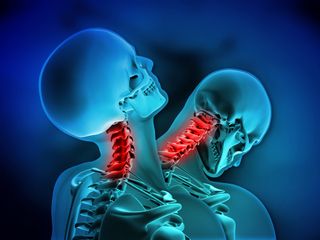 Whiplash is an injury of the neck's soft tissues resulting from forced movement, such as the forward-backward 'whip' that occurs during a car crash.
(Image: © BioMedical | Shutterstock)

Whiplash is a neck injury that is common in car crashes, but it can also be caused during other types of accidents. In the United States, over 2 million people suffer from whiplash each year, according to Rush University Medical Center. Neck injuries are the most common type of injury claim reported to insurance companies in the United States and make up 25 percent of payments made by insurers. Insurance payment for rear-impact-type whiplash injuries in the United States is estimated to be approximately $2.7 billion, according to a 2009 paper published in the Journal of Chiropractic Medicine.

Whiplash describes any injury of the neck's soft tissues resulting from forced movement and can include injury to cervical muscles, intervertebral joints, discs, and ligaments and nerve roots, according to the National Institute of Neurological Disorders and Stroke.

The head's jerking action pulls muscles and ligaments beyond their typical range of motion, causing fibers to tear. Torn fibers in a muscle or tendon is called a strain, whereas in a ligament it is called a sprain. Whiplash often involves both. Extreme cases may involve fractured or dislocated bones, as well.

Whiplash can also be a classified as a secondary injury of a concussion, Kenneth Podell, a neuropsychologist at Houston Methodist Hospital, told Live Science. Whiplash and other secondary injuries can complicate concussion treatment. Usually a concussion only needs rest as treatment, Podell explained, but some require additional treatment to treat secondary injuries following an injury to the head such as migraines, whiplash or cervical strain, dizziness or ocular-motor deficits.

Common symptoms of whiplash include neck pain, stiffness and headaches that usually start at the base of the skull, according to the Mayo Clinic. Other symptoms include:

People with whiplash usually recover within a few months, though some experience ongoing symptoms. Symptoms that go beyond six months are called chronic whiplash.

Typically, treatments for whiplash include pain medication. The type of medication depends on the severity of the injury. Some people are fine using over-the-counter pain killers like aspirin or ibuprofen (Advil, Motrin), while some need prescriptions for muscle relaxers or injections of lidocaine (Xylocaine), which is a numbing medicine, according to the Mayo Clinic.

Special exercises are often prescribed to help increase range of motion in the neck. Some exercises are as simple as rolling the head from side to side. In more serious cases, the doctor may prescribe physical therapy with a specialist.

When many people think of whiplash they envision people with foam collars around their necks. There are two schools of thought on these collars. Some believe that the neck should be exercised as soon as possible after an injury, while others think that the neck should be supported. While some studies show that early exercise is better than using a collar, other studies have been inconclusive. A paper by Harvard concluded that a soft cervical collar, worn for 10 days or less for symptom relief, doesn’t seem to hurt the neck.