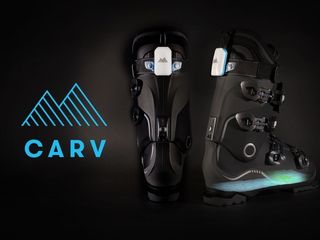 Carv is a device that directly attaches to ski boots and wirelessly connects to a smartphone to relay instructions on how to improve your technique while skiing.
(Image: © Carv)

Whether you fear face-planting the moment you get off a chairlift or you're perfectly at home on the slopes but want to better navigate a tricky black-diamond course, a new wearable gadget for skiers is here to help.

The Carv, developed by the United Kingdom-based company MotionMetrics, is a device that directly attaches to ski boots and wirelessly connects to a smartphone to relay instructions on how to improve your technique while skiing.

The wearable device has two parts that attach to a ski boot: an insert and a tracker. The insert looks like a memory-foam liner and is housed directly underneath the foot. The Carv insert does not sink under pressure as memory foam does, but it does remember and record where it experiences pressure, with the help of 48 sensors, according to MotionMetrics. [Bionic Humans: Top 10 Technologies]

The sensors are designed to pick up subtle changes in pressure distribution and to track acceleration, rotation speed and location, said Jamie Grant, CEO of MotionMetrics.

The insert is less than a millimeter thick and doesn’t affect the user's ability to ski, according to the company. The insert has a cord that extends up the back of the ski boot to connect with a tracker that clips onto the outer top edge of the back of the boot. The tracker manages data collection, calculates pressure and motion, and communicates with a smartphone to provide instructions to the skier.

The device can relay messages such as, "Keep your weight forward!" and "Good job!" while the skier is on the slopes. "Every time you finish a turn, we calculate a load of metrics," Grant told Live Science in an email. The metrics feed into software that comes up with recommendations when it senses a pattern, Grant said.

The Carv uses metrics that measure pressure and motion. For instance, the device can sense how symmetrical a skier's feet are, how much pressure is placed on each foot, what the pressure difference between the inside and the outside of the foot is, the location of the skier's center of pressure during turns, and the forward and backward pressure exerted as a skier moves, Grant said.

After the sensors collect data, this information is fed through an algorithm that identifies patterns, and then the algorithm produces text that is relayed to the skier, Grant said. The combined metrics can reveal if a skier is off-balance while skiing or landing too hard on jumps, for example.

Grant and his team spoke with ski instructors and watched different skiers, including Olympians, to estimate a reasonable range for the metrics, Grant said. The Carv even takes the type of skiing (downhill or cross country, for instance) into account while measuring metrics, Grant said.

The Carv can be synced with video footage from a GoPro or other camera to add a visual component to the data analysis, the company said. (Our sister site, Tom's Guide, put together a guide for how to decide which GoPro is right for you.) And the device can be social: Skiers using Carv can share their progress with friends and compare their improvement with fellow Carv users.

MotionMetrics ran a Kickstarter campaign to raise money for the project. The crowdfunding campaign far surpassed its original goal of $50,000, raising a total of $275,196 from 1,234 backers, as of March 31. The Carv can be preordered online via Indiegogo. The company is selling two trackers and two inserts for $299, plus shipping. The Carb is expected to ship to customers in January 2017, according to the company.