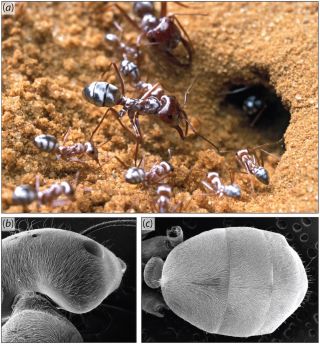 One ant species in the Sahara Desert is covered by a silvery sheen of body hair that acts as a wearable sun shield for the creatures, a new study finds.

The silvery hairs completely reflect the light like mirrors, preventing the ants from absorbing too much heat. That may help to explain how the Saharan silver ants can stay cool when temperatures in the arid region reach a blistering 122 degrees Fahrenheit (50 degrees Celsisus).

"The ability to reflect solar radiation by means of total internal reflection is a novel adaptive mechanism in desert animals, which gives an efficient thermal protection against the intense solar radiation," study co-author Serge Aron, an evolutionary biologist at the University Libre de Bruxelles in Belgium, said in a statement. "To the best of our knowledge, this is also the first time that total internal reflection is shown to determine the color of an organism." [See Photos of Crazy Ants]

The Sahara is the hottest large desert on the planet and one of the most punishing environments for any creature to withstand. Comprising millions of square miles of sand dunes that cover 10 African countries, the area is inhabited mostly by myriad small and scurrying creatures, such as rodents, snakes and scorpions.

One of these native creatures is the Saharan silver ant. These shiny ants are known to be well-adapted to Sahara's withering heat. Scientists had shown in past research that the ants' silver hairs played a role in preventing overheating, but they weren't sure exactly how that worked.

To answer that question, Quentin Willot, an evolutionary biologist at the University Libre de Bruxelles, Belgium and colleagues took a very close look at the ants' hairs. The team analyzed the path of reflected light inside the silvery hairs under a scanning electron microscope, then compared that to the light path in the ants that had been shorn of their hairs.

Those ants sporting a luxurious patch of hair were 10 times as reflective as their shaved brethren. What's more, the team found the silvery hairs formed a kind of prism, which forced light rays entering the hair to be completely reflected off the bottom surface, rather than passing through and entering the ant's body. The prism effect occurs thanks to the triangular cross-section of the hairs, the researchers reported yesterday (April 13) in the journal PLOS ONE.

These adaptations seem to work: The silver-haired ants kept their bodies up to 4 degrees F (2 degrees C) cooler than the shaved ants did.

Though other ants and related species also sport protective bristles, most have cylindrical or plate-like cross-sections, meaning the internal reflection achieved by the Saharan silver ant may be unique, the researchers said.