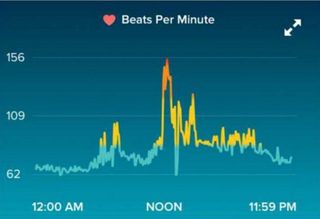 A screenshot of the Fitbit app showing a patient's heart rate data on the day he experienced a rapid and irregular heart beat.
(Image: © Alfred Sacchetti, MD)

For one New Jersey man, wearing a fitness tracker paid off in a big way: Doctors in the emergency room used the gadget to help determine the best way to treat his heart problem, according to a new report of the case.

The 42-year-old man went to the ER after he had a seizure, and doctors there found that his heart rate was irregular and rapid, measured at up to 190 beats per minute. Although the man had experienced seizures before, he'd never had a heart problem.

To treat the man, the doctors needed to know when his irregular heart beat had started. If it was a recent problem, one that started in the last few days before his visit, they could use a procedure called cardioversion. In this treatment, low-energy shocks are given to restore normal heart rate, the researchers said. But if it had started weeks or months ago, then that treatment might not have any effect.

People can't always tell if they have an irregular heart rate, and so doctors can't just ask them when it started.

But in this case, the doctors noticed the man was wearing the Fitbit Charge HR, which includes a heart rate monitor, so they pulled up the man's heart rate data in the app on his smartphone. They then saw that his heart rate was usually 70 to 80 beats per minute, but had jumped to 140 to 160 beats per minute about 3 hours before he arrived in the emergency room.

"Using the patient's activity tracker — in this case, a Fitbit — we were able to pinpoint exactly when the patient's normal heart rate of 70 jumped up," study co-author Dr. Alfred Sacchetti, chief of emergency services at Our Lady of Lourdes Medical Center in New Jersey, said in a statement. This gave doctors the information they needed to decide that the man was a candidate for the cardioversion treatment.

The man's heart rate returned to normal with just one of the shock treatments, the report said. [The Best Heart Rate Monitor Apps]

This isn't the first time a consumer-tech gadget has been credited with helping save a life; last September, a high school student went to the emergency room after his Apple Watch indicated that his heart rate jumped from about 70 beats per minute to 145 beats per minute. He was diagnosed with rhabdomyolysis, a condition in which muscles release a protein that damages the kidneys and other organs. The disorder can be life-threatening.

Still, Sacchetti noted that fitness trackers are not approved medical devices, and using them to make medical decisions is at the doctor's own discretion.

The report was published online April 1 in the journal Annals of Emergency Medicine.