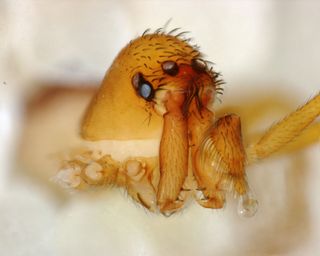 The face of a male trap-jaw spider (Chilarchaea quellon), with its signature and exceptionally long chelicerae, a spider's "jaws."
(Image: © Hannah Wood, Smithsonian)

Unlike other types of ground hunting spiders that grab hapless insects with their front legs, the trap-jaw spiders capture their insect dinner by snapping prey between their chelicerae — specialized mouthparts — which are longer than the chelicerae of most other spiders.

And some of the trap-jaw spiders snapped up bugs with exceptional speed. Several species exhibited a power-amplified technique that slammed their jaws shut with a force that exceeded the direct power output of their muscles. Certain ant species have been known to exhibit similar types of predatory prowess, but it was previously unknown in spiders, the scientists reported. [Slo-Mo Video: Super-Spider Power! Arachnid's 'Trap-Jaw' Chomps with Lightning Speed ]

The jaws that bite

There are currently seven genera (genuses) and 25 known species of trap-jaw spider in the Mecysmaucheniidae family, though the study authors point to at least 11 additional species that are yet to be described.

The spiders are tiny, with the smallest having a body length of less than 0.08 inches (2 millimeters). The largest species described in the study has a body measuring approximately 0.3 to 0.4 inches (8 to 10 millimeters), according to Hannah Wood, the study's lead author and an arachnology curator at the Smithsonian Institution's National Museum of Natural History in Washington, D.C.

Wood told Live Science that the spiders live and hunt on the ground in leaf litter and that the species can vary greatly in color — from pale to dark red, with some having abdomens that are purplish-red, patterned with chevrons, or even sporting hardened plates.

The researchers even saw quite a bit of variation in the shapes of the spiders' mouthparts and in the carapace, a plate that covers their heads — which was unusual, Wood said.

"Typically, in a spider family, they share a similar carapace shape," Wood said, adding that it made sense that these spiders would exhibit greater variation, because carapace shape seems to be linked to the snapping speed in their jaws.

Another peculiarity in the spiders was a habit of raising and waving their first pair of legs as they slowly approached their prey — a practice Wood called "very unusual in spiders."

Wood first studied the spiders in Chile in 2008; while several species had been described previously, little was known about how they lived and behaved. Wood dubbed them "trap-jaw spiders" after observing their hunting technique, and high-speed video later revealed that some of the spiders snapped at superfast speeds.

The species with the quickest jaw snap were the smallest spiders, Wood told Live Science. More research will be required to explain why that's the case. However, Wood suggested that one possible explanation could be that the spiders favor very-fast-moving prey with a rapid escape jump.

The study represents years of observing, recording and analyzing the spiders' hunting behavior, and conducting extensive genetic analysis of the group. But there is still much to discover about the known species of trap-jaw spider. There's also much more to learn about the species yet to be described, as well as the still-unknown arachnids whose ecosystems might disappear before they're glimpsed for the first time, Wood said.

The findings were published online today (April 7) in the journal Current Biology.