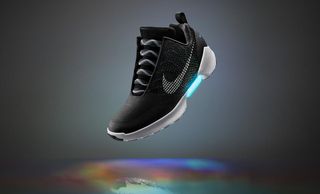 Fans of the "Back to the Future" film franchise have likely been counting the days until time machines, hoverboards and flying cars are a reality, but at least one of Marty McFly's futuristic gadgets — self-lacing sneakers — could soon inject a little innovation into your wardrobe.

Nike has announced it will begin selling self-lacing sneakers later this year. The new HyperAdapt 1.0 shoes will feature so-called adaptive lacing, which could offer a more comfortable experience for runners.

"When you step in, your heel will hit a sensor and the system will automatically tighten," Tiffany Beers, a senior innovator at Nike, Inc., and the project's technical lead, said in a statement. "Then there are two buttons on the side to tighten and loosen. You can adjust it until it's perfect." [10 Technologies That Will Transform Your Life]

Nike said the HyperAdapt 1.0 shoes are the culmination of extensive digital-, electrical- and mechanical-engineering research, and the finished product will not only solve existing problems with fit, but could also lead to revolutionary advances in adaptive performance. In other words, people can customize the shoes to fit their individual preferences, and athletes can also manually make modifications while wearing the sneakers.

"It is amazing to consider a shoe that senses what the body needs in real time," Nike designer Tinker Hatfield, who has designed some of the company's most popular sneakers, including many in the Air Jordan and Nike Air Max lines, said in a statement. "That eliminates a multitude of distractions, including mental attrition, and thus truly benefits performance."

For example, the shoes could make micro adjustments on the fly. Runners who accidentally tie their shoes too tightly will no longer have to stop to relieve the pressure. Alternatively, those who fail to tie their shoes tightly enough and find their feet slipping around inside their running shoes will be able to remedy the problems without slowing their pace.

"That's an important step, because feet undergo an incredible amount of stress during competition," Hatfield said. [7 Common Exercise Errors and How to Fix Them]

Beers and Hatfield are spearheading the project, and one of their earliest ideas included a snowboarding boot with an external generator. While the technology is too cumbersome to be practical, Beers and Hatfield have since refined it to be compact enough to fit within a running shoe, robust enough to stand up to everyday wear and tear, and flexible enough to move with an athlete's body.

"It's a platform," Beers said, "something that helps envision a world in which [the] product changes as the athlete changes."

The designers see the HyperAdapt 1.0 (as the "1.0" in its name suggests) as a first step in the field of adaptive performance. While the shoes are currently manual — meaning the athlete still controls the modifications — the technology opens up new possibilities for how sneakers could function almost seamlessly with a person's feet, Hatfield said.

"Wouldn't it be great if a shoe, in the future, could sense when you needed to have it tighter or looser?" Hatfield said. "Could it take you even tighter than you'd normally go if it senses you really need extra snugness in a quick maneuver? That's where we're headed. In the future, [the] product will come alive."

Nike's HyperAdapt 1.0 shoes will be available exclusively to Nike+ members during the 2016 holiday season. The company has not released additional information about the product's price, or when the shoes would be widely available for consumers.