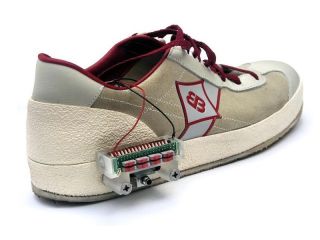 This energy harvesting device is mounted on the outside of a sneaker, but such devices can also be embedded in the heel of a shoe to harvest energy as a person walks or runs.
(Image: © Kelvis Ylli/IOP Publishing )

The next generation of wearables could be powered by an unlikely energy source: you. Two new devices that fit inside the sole of your shoe can harvest energy from your movements as you walk or run, and then use that energy to power sensors and other electronics.

These devices could one day be used to create wearables that never need to be plugged into a charger, according to the researchers in Germany who developed them.

"Both [devices] are based on the same principle — electromagnetic induction," said Klevis Ylli, a doctoral student at the Hahn-Schickard-Gesellschaft Institute of Micromachining and Information Technology in Germany, and lead author of the paper outlining the new energy harvesting devices. [10 Technologies That Will Transform Your Life]

Each device contains coils of wire and stacks of magnets. As the person wearing the device walks or runs, the magnets move past the coils, causing the magnetic field within the coils to change. This changing magnetic field creates a voltage, or charge, within the wire, which can then be used to power whatever electronics are embedded in the shoe, Ylli told Live Science.

The swing harvester — which is about 3 inches (70 millimeters) long, less than an inch (19.5 mm) wide and half an inch (15 mm) tall — was originally developed to power a pair of self-lacing shoes. The device fits into the sole at the heel of a shoe and weighs just under an ounce (25 grams), which means that users hardly notice it when their legs are swinging, Ylli said. The shock harvester is slightly bigger, and weighs about a third of a pound (150 grams) and was developed for a different application — providing power for an indoor navigation system.

Indoor navigation systems are an alternative to satellite-enabled GPS navigation systems, which don't always work inside of buildings or in crowded urban areas. Used by firefighters and military personnel, these indoor systems often utilize sensors to collect information about a person's location and then transmit this data wirelessly to a central computer.

"For the indoor navigation system, there are sensors [accelerometers] within the shoe that determine how fast you're moving, acceleration and the angles that your foot has traveled. And from this data, the system can calculate the path that you have walked," Ylli said. A battery, also located inside the shoe, is powered by the shock harvester, and keeps these sensors running.

In recent tests, Ylli and his colleagues connected the harvesters to a temperature sensor embedded within the shoe of a study participant who was walking on a treadmill. The researchers found that the person's walking generated enough electricity to power the temperature sensor as well as a wireless transmitter inside the shoe that sent the temperature data from the sensor to a smartphone.

In the future, a similar setup could be used to transmit data from accelerometers embedded in a shoe to a smartphone or tablet, Ylli said. Such a self-charging "smart shoe" would function much like a fitness tracker, monitoring steps taken, as well as distance and speed.

"If you take a close look at the scientific environment, there are plenty of people working on these types of [harvesters] for shoes. I think there is some interest there, and people have high hopes that harvesters will get better over time and will be feasible for powering devices," Ylli said.

Going forward, Ylli said, he and his colleagues plan to optimize their harvesters to capture even more energy from the human gait. A paper outlining their research so far was published today (Jan.14) in the journal Smart Materials and Structures.

Editor's Note: This article was updated to include the proper weight of the swing harvester, which is 25 grams.