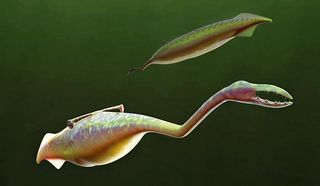 The Tully monster likely used its tail to propel it forward in the water.
(Image: © Sean McMahon | Yale University)

In 1958, amateur fossil collector Francis Tully found a prehistoric creature so strange that even scientists called it a monster. The beast has perplexed researchers ever since, with some calling the so-called "Tully monster" a worm and others classifying it as a shell-less snail.

But now, an analysis of more than 1,200 Tully monster (Tullimonstrum gregarium) fossils has uncovered the monster's true identity. It's a 307-million-year-old jawless fish, a creature in the lineage leading to modern-day lampreys, the researchers found.

The roughly foot-long (0.3 meters) monster had a narrow body with eyes like a hammerhead's on the top of its head and a long, slender snout ending in a toothy jaw.

Scientists formally described it in 1966, and in 1989, Illinois designated it as the official state fossil. But experts still couldn't make heads or tails of it. They couldn't even place it in a phylum, a big-picture category that includes about 30 broad subcategories, and explains the origins of almost every living thing on Earth.

Researchers have found thousands of Tully monster specimens in Illinois over the years. Many of them were digitally scanned into The Field Museum's electronic database, so scientists had plenty of samples to examine while undertaking the new study.

"Basically, nobody knew what it was,” study co-author Derek Briggs, a professor of geology and geophysics at Yale University and a curator of invertebrate paleontology at the Yale Peabody Museum of Natural History, said in a statement. "The fossils are not easy to interpret, and they vary quite a bit. Some people thought it might be this bizarre, swimming mollusk. We decided to throw every possible analytical technique at it."

The researchers combed through the database and also used synchrotron elemental mapping, a technique that uses a powerful light source to determine the chemistry within a fossil.

Although soft-bodied, the Tully monster is a vertebrate that likely used its tail to propel itself forward in the water. Moreover, analyses showed that "the monsters are related to the jawless fishes that are still around today by a unique combination of traits, including primitive gills [and] rows of teeth," Paul Mayer, The Field Museum's fossil invertebrates collections manager, said in the statement.

It also has "traces of a notochord, the flexible rodlike structure along the back that's present in chordate animals — including vertebrates like us," Mayer said.

The big-eyed and pointy-toothed fish was likely a predator, said study lead author Victoria McCoy, who conducted the research as a Yale graduate student and is now at the University of Leicester in the United Kingdom. However, it's unclear when the animal first developed and when it went extinct, she said.

The study was published online today (March 16) in the journal Nature.