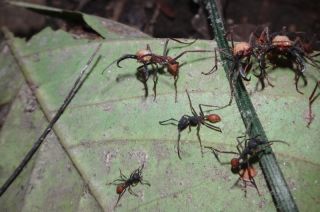 Eciton burchellii ants, which are among the aboveground species that appeared to regrow the parts of their brains used for sight.
(Image: © Sean O'Donnell/Drexel University)

About 18 million years ago, army ants that were adapted to living underground — and had lost much of their sight — returned to the surface and regrew the parts of their brains related to vision, a new study has found.

But the brain benefits didn't end there. Not only did the ants recover a set of previously underused brain structures, but their overall brain size increased as well. In turn, this brain-size increase enhanced the ants' sensory input capabilities as well as their processing centers to handle a more complex environment.

I can see clearly now

The army-ant subfamily Dorylinae dates to about 78 million years ago, and most of these ants live underground at least part of the time; their eyes are either very small or completely absent. In the study, the researchers noted that this subfamily descended from a large-eyed ancestor whose vision capabilities and vision-related brain regions dwindled over time — a transition that occurred repeatedly within the ant lineage.

But what happened to one branch of the army-ant family was extremely unusual: After living underground for 60 million years, army ants from the Eciton genus headed back into the light, and over time, their brains changed dramatically as they adapted to living on the surface.

The researchers found that the optic lobes of surface-dwelling Eciton army ants were significantly larger than the optic lobes in their underground cousins. The regions of their brains dedicated to processing smell were larger, too, and the ants' brain volume increased relative to their body size. [Cool Close-Up Photos Show Ants of the World]

These structural changes suggested to the researchers that the growth in the ants' changing brains was being driven by a range of environmental stimuli, such as variations in activities based on the day-night cycle, an increased threat of predators and greater prey diversity.

Study co-author Sean O'Donnell and other researchers in his lab have been investigating army-ant diversity and ecology since 2003. O'Donnell, an evolutionary biologist and professor in the Drexel University Biology Department in Pennsylvania, told Live Science in an email that he and his colleagues were eager to explore an aspect of army-ant biology that was previously unknown: how much the brains of ants that lived aboveground differed from those of ants that lived underground.

"Similar studies on other groups of animals — cave fish and their relatives, subterranean insectivore mammals — suggested they [army ants] were a great place to look for evolutionary changes in brain structure," he said.

O'Donnell explained that peering at the brain of an ant — and in the species they sampled the most, that's about the size of small sand grain — involved a lot of preparation by a skilled and dedicated lab team. After preserving the ant with a fixative, they embedded the tiny head in resin, sliced it into sections, and then stained and photographed the tissue. Once the scientists had the photos, they measured the brain structures and then calculated their volume by stacking the slices and multiplying by their thickness.

O'Donnell and his colleagues suggested a few aspects of the aboveground world that are more complex and require the evolution of extra brain space: a diversity in prey, the presence of predators, and the variation between daytime and nighttime activities.

The large brains and enhanced optic lobes in Eciton ants were exceptional for any species of army ants, but the researchers found that Eciton ants had even more surprises in store. Even though they sported working peepers, their eyes seemed to differ from those of other insects.

"One exciting pattern we uncovered is the suggestion that Eciton eyes are functional but seem to have [a] peripheral and neural structure that is distinct from most insect eyes," O'Donnell said. "We are keen to explore how their eyes function."

The findings were published online March 8 in the journal The Science of Nature.