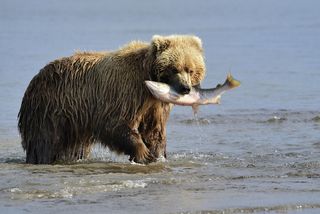 Animals in the bear family were among the best problem-solvers in a new study detailed Jan. 25, 2016, in PNAS.
(Image: © AndreAnita/Shutterstock.com)

Having a big head might not be such a bad thing, if it means you have a gigantic brain. Animals with bigger brains may be better problem-solvers, according to a new study.

Scientists long thought a correlation existed between an animal's relative brain size and its cognitive abilities, but even after decades of research, controversy over the answer abounds. In addition, little experimental data exists on the topic, said Sarah Benson-Amram, of the University of Wyoming in Laramie.

So, Benson-Amram and her colleagues put a group of animals to the test, finding that species with relatively large brains for their bodies were the most successful at completing a problem-solving task, they reported on Jan. 25 in the journal Proceedings of the National Academy of Sciences.

"There's always been this assumption that if you have a big brain, you're smart. We know that brains are costly energetically, so the species that devote more of their resources to their brain must be doing it for a reason. And that reason has always been assumed to be intelligence," said Benson-Amram, the study's lead author. [The 5 Smartest Non-Primates on the Planet]

However, that doesn't always mean bigger beasts are the intellectuals of the animal kingdom. Though bigger brains tend to follow body size — a sperm whale's brain weighs in at 20 pounds (9 kilograms), compared with a desert ant's 0.00028-gram brain — that's not always the case. Some species, such as dolphins, have larger brains than expected for their body size, while others, such as the hippo and blue whale, have much smaller brains relative to their body sizes.

Benson-Amram and her team presented 140 zoo-dwelling mammalian carnivores, from 39 different species, with a puzzle box with a treat inside. To get to the tasty snack, the animal had to open an L-shaped latch on the box.

Designing a box that the animals couldn't just tear through with their maws was tricky, Benson-Amram said, because some of the animals have powerful jaws. Hyenas, for example, can bite through the femur of a giraffe. Ultimately, the researchers built a heavy, metal box with slats so the animals could see and smell what was inside.

The treats were specially selected for each animal. For a red panda, bamboo lay on the other side of the latch, while hyenas had to puzzle their way to a hunk of meat.

Some animals used their mouths or paws to open the latch quickly and easily. Others first would investigate the box by sniffing it or flipping it around before opening it.

"River otters are amazing to watch," Benson-Amram said. "They are very active. They would use their noses to flip the box repeatedly over and over again."] Ultimately, some of the otters opened the latch.

The badger, for its part, seemed to think the food was beneath the box and dug an enormous hole, hoping to get at the snack that way.

Each animal got 30 minutes to open the box. Animals in the bear family, river otters, badgers, wolverines, and less known animals like coatis, ringtails and kinkajous, were among the most successful at this task. But other animals, such as two species of mongoose, never managed to open the box. [See Photos of Evolution's Most Extreme Mammals]

In addition to relative brain size, the researchers also looked at how sociality affected problem-solving.

"There's this idea, called the social brain hypothesis, which proposes that intelligence evolved to deal with a lot of the challenges within the social domain," Benson-Amram said. Those challenges include keeping track of relationships in a social group and knowing an individual's role in the group.

In this study, the researchers didn't find any link between an animal's sociality and its success with the problem-solving task.

"That's not to say that the social brain hypothesis is invalidated," Benson-Amram said. "But in this particular study, we didn't find support for it."

The researchers also looked for a correlation between an animal's manual dexterity and its success. They found that an animal's skill with its forepaws didn't seem to help them as much as relative brain size in opening the box.

The same went for body size. Bigger animals, like bears, did not seem to have much of a brute-force advantage, Benson-Amram said.

"Relative brain size was really the most significant factor explaining success on the problem," she said.

Scientists had suspected this link to brain size, but their hypothesis lacked data, Benson-Amram said.

Instead of assuming "brains make you smart, that's why we have them," she said, "our study is a great step forward in providing some concrete experimental data that yes, in fact, having a relatively larger brain does increase your ability to solve a novel problem."