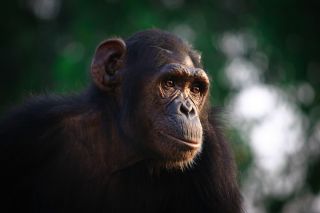 This chimpanzee and members of 35 other animal species were tested for their abilities to exert self-control in two experimental tasks.
(Image: © Image courtesy of Evan L. MacLean.)

Animals with larger brains may have more self-control than creatures with smaller noodles, a new study suggests.

Researchers tested dozens of different species to measure how well they could regulate their behavior, and found that animals with larger brains or more complex diets had greater self-control.

The findings suggest that feeding ecology and brain size may have played roles in cognitive evolution, the researchers say. [7 Ways Animals Are Like Humans]

"Self-control is important for any species on the planet," said study researcher Evan MacLean, an evolutionary anthropologist at Duke University in Durham, N.C. [Video: Experiments on 36 Species]

Humans use this ability to decide whether to save money for retirement or whether to eat a cookie while on a diet. In the animal world, predators use it while stalking prey to decide on the right moment to pounce, MacLean told Live Science. Yet scientists still know very little about how the trait evolved.

MacLean and his colleagues compared self-control among 36 different species, ranging from birds to elephants to primates. They tested the animals on two measures of self-control.

In one test, the researchers would repeatedly hide food in a particular place, in view of the animal, until the animals got used to finding it there. Then, the researchers hid the food in a different location as the animals watched. If an animal succeeded in retrieving the food from the new hiding spot rather than the old one, the researchers took that to mean that the animal had exercised self-control, which they defined as "the ability to inhibit a prepotent but ultimately counter-productive behavior."

In a second test, researchers hid food inside an opaque container with an opening in the back, through which animals could reach for the tasty treat. Once the animal learned this task, the researchers replaced the container with a transparent one, which still had a hole in the back in which food was hidden. The animals were considered to be using self-control if they reached around to the opening in the back, instead of trying to reach through the container.

The researchers compared the animals' performances on these tasks with their "absolute" brain size and with brain size relative to their body size — two metrics that are thought to correlate with cognitive capacity in animals.

The great apes in the study showed good self-control, as the researchers expected. Surprisingly, the carnivores in the study — dogs and wolves — also did well, whereas the elephants did poorly, although the latter only completed one of the self-control tests, MacLean said.

On the whole, species with larger brains (in absolute size) showed better self-control than did animals with smaller brains. But larger relative brain size was not linked to better self-control. The researchers did not have data on the degree of "folding" of each species' brain, another characteristic that studies have associated with intelligence.

In addition to brain size, the researchers also looked at whether the diet and social habits of each species influenced its ability to regulate its actions. The team found that species with more complex diets, such as primates, showed greater self-control.

The study didn't look at self-control in humans, although "it would be interesting to do," MacLean said. But given how well the great apes did on the self-control tests, humans would probably perform similarly, he said.