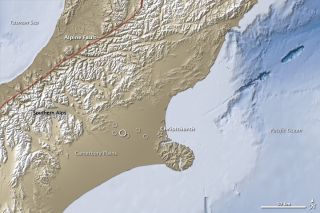 The Alpine Fault, part of the fault zone at the point where the Pacific Plate is diving beneath the Australian Plate, has shifted the two corners of New Zealand's South Island relative to each other a whopping 435 miles (700 kilometers) over the last 25 million years. That shift translates to a maximum speed of about 1.85 inches (4.7 centimeters) of slip per year.

The estimate is much higher than previous estimates based on rocks in the region, which suggested the fault had shifted just 60 percent of that amount in the last 25 million years. It turns out the low estimates ignored the fact that the fault motion switched directions in the recent past.

"I don't think anybody in their wildest dreams would have thought that displacements on the fault could be so large, and also change direction so dramatically through time," study lead author Simon Lamb, a geologist at Victoria University of Wellington in New Zealand, said in a statement. [Image Gallery: This Millennium's Most Destructive Earthquakes]

The runner-up in the tectonic plate race is the Altyn Tagh plate, which runs beneath the Himalayas in Tibet. That fault has shifted a total of 295 miles (475 km) in the same period, the study found.

The Alpine Fault snakes up from Duneidin, in the southwest corner of New Zealand's South Island, before extending up to the northeast corner of the island. The fault connects veins into a larger network of faults along the Pacific and Australian Plate boundaries, including the Macquarie Fault to the Southwest and the North Island fault system to the North East.

Distinctive rocks have been found on either side of the Alpine Fault about 280 miles (435 km) apart, suggesting the fault had slipped that amount at some point during the Cenozoic Era, which extends from about 65 million years ago to the present.

However, rocks on the ocean floor suggest that the Australian and Pacific Plate subduction zone should have caused about 40 percent more slip than seems to show up in the Alpine Fault rocks. Previously, researchers had assumed that missing slip was taken up by rotation and displacement on other faults stretching across a 186-mile-long (300 km) expanse.

To understand what was going on, Lamb and his colleagues took a closer look at both geological maps of the country and the magnetization of minerals in the rocks found along the fault. Magnetic minerals act as tiny compasses and point in one direction or another as the Earth's magnetic shield shifts over time.

Based on the orientation of those tiny compass minerals, the team concluded that the missing displacement had actually been there on the Alpine Fault all along. The missing slip revealed itself when the researchers realized the fault was moving in the opposite direction during the Eocene Period, at a time when the supercontinent of Gondwana, Antarctica and New Zealand were breaking apart from one another, the researchers reported online March 1 in the journal Geochemistry, Geophysics, Geosystems.

"The key to this new understanding is the realization that the rocks had actually shifted about 250 kilometers (155 miles) in the opposite direction prior to this, and so to make up for this, the younger motion is much bigger than we had thought," Lamb said.

The findings could help explain why most of the earthquake risk in New Zealand seems to be concentrated in the South Island along the Alpine Fault, Lamb said. The findings could also explain some of the plate tectonics that were occurring on the other side of the supercontinent, near Antarctica, around 65 million years ago when the dinosaurs died out, Lamb added.