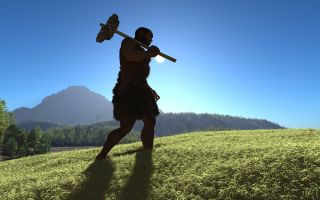 Scientists who forced volunteers to chew raw goat flesh (yes, chew) have found that such meat-gnawing likely caused human teeth and jaws to shrink throughout our evolutionary history.

Slicing raw flesh into smaller pieces and then chewing would have helped ancient hominins spend less time and energy eating than their ancestors.  These changes, in turn, might have supported the evolution of speech and language by changing human facial anatomy, scientists added.

The earliest undisputed ancestor of modern humans was Homo erectus, which arose at least 1.8 million years ago. It possessed larger brains and bodies than other hominins — members of the human family tree dating from the split from chimpanzees onward. [Top 10 Mysteries of the First Humans]

The greater size of H. erectus meant that it would have needed more energy to grow than its precursors did. Strangely, however, H. erectus differed from earlier hominins in possessing weaker tools to obtain energy from its diet — it had smaller teeth, weaker chewing muscles, wimpier bites and a smaller gut.

Previous research suggested that changes in human diet such as cooking might help explain this paradoxical combination of increased energy needs and decreased chewing and digestive capabilities. However, prior studies found that "the earliest archaeological evidence for cooking dates back to 1 million years ago, and regular cooking didn't begin until about 400,000 or 500,000 years ago," long after H. erectus evolved, said study senior author Daniel Lieberman, a biological anthropologist at Harvard University.

Now, the researchers suggest that eating meat often, and using stone tools to slice up this meat, could help explain why human teeth and jaws shrunk over time.

"Before there was regular access to cooking, we know that 2.5 million years ago, there was evidence of regular meat-eating by hominins — for instance, we have carcasses with cut marks on them," Lieberman said. "We also see stone tools occurring more or less at the same time."

The scientists focused on chewing. "If you spend time with chimpanzees or other apes, most spend half their day chewing," Lieberman told Live Science. In contrast, modern human subsistence farmers "maybe spend 5 percent of their time chewing," and those living in industrial societies "spend much less than that, maybe just a few minutes a day," he said. [Infographic: Human Origins – How Hominids Evolved]

To test their hypothesis that raw meat could have shrunk human jaws, the researchers had volunteers wear electrodes on their faces and bite down on a sensor with varying levels of force. The electrodes analyzed how many muscle fibers were involved in each bite and how active these fibers were, while the sensor measured the amount of force each bite entailed. This helped the scientists deduce how much force each person applied during a bite given a certain amount of muscle activity. The scientists then had the volunteers chew on food while they wore electrodes on their face to measure their muscle activity during bites.

The researchers had volunteers chew on pieces of food — goat meat, yams, carrots and beets. Goat is relatively tough and therefore more similar to wild game than domesticated beef, which is bred to be tender, while prior work suggested that starchy underground plant items such as yams, carrots and beets were important parts of hominin diets.

The food was either raw or received minimal preparation using three methods potentially available to ancient hominins — it was either sliced up with stone flakes, pounded with rocks, or roasted over fire.

"The stone flakes that we strike off rocks are sharper than any knife we have — maybe not super-expensive knives, but better than the average knife in a kitchen drawer," said the study's lead author, Katherine Zink, an evolutionary biologist at Harvard University.

The volunteers either chewed and swallowed the food, or chewed it until they felt like they could swallow it, after which they spat it out so that Zink could take photos of the mouthfuls and measure how large they were.

It turns out that human teeth are very poorly designed for ripping meat, Lieberman said.

"When you think of carnivores, dogs and whatever, their teeth have shearing crests that act like scissors for slicing," Lieberman said. "Our teeth are really like mortars and pestles."

"Probably the most surprising thing to me about this work is how relatively easy it is to break down raw meat," Zink told Live Science.

"With hindsight, this makes sense," Lieberman said. "Wherever you see people eat meat, they don't eat it like dogs — they cut the meat. We're so disconnected today from our hunter-gatherer ancestors, it takes an experiment to figure out the obvious."

Roasting the meat actually increased the muscular effort needed to eat it by 15.3 percent per chew and 32.8 percent per sample. However, chewing roasted meat could reduce the size of swallowable chunks by 47.1 percent, so while roasted meat might require more effort to chew, it was easier to swallow and digest. Roasted veggies required 14.1 percent less effort per chew and 22 percent less effort per  swallow.

All in all, the researchers estimated that by eating a diet composed of one-third meat and two-thirds veggies — similar to the diet of a modern African hunter-gatherer — and slicing the meat and pounding the veggies with stone tools before eating, early Homo would have needed to chew 17 percent less often and 26 percent less forcefully. "That's about 2.5 million fewer chews per year," Zink said.

The researchers suggest although modern humans differ from H. erectus, their findings apply to ancient hominins because of the similarities between modern and ancient hominin teeth. "If a H. erectus walked into a dental office, a dentist would have a hard time telling their teeth apart from modern humans," Lieberman said. "If an australopith like Lucy walked in, the dentist would probably have a conniption fit."

Meat and tools would have freed early humans to develop smaller chewing-related anatomical features. This in turn may have led other features to evolve. For instance, a shorter jaw would help hominins speak better, which could have supported the evolution of language. Shortening the snout would have also moved the head's center of mass forward, "leading to a much more balanced head, and making it easier to stabilize ourselves when we run," Lieberman said.