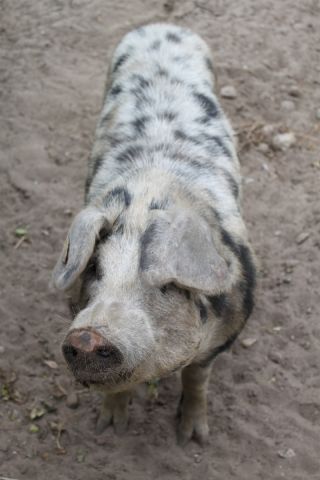 About 6,600 years ago the Ertebølle Mesolithic hunter-gatherers acquired domesticated pigs whose black-spotted coat might have looked similar to that of this modern-day Bentheimer pig.
(Image: © Ben Krause-Kyora )

Ancient hunter-gatherers in Europe, whose meat intake was once limited to wild game, may have enjoyed bacon, ham, pork chops and other tasty bites from pigs they owned starting about 7,000 years ago, researchers say.

The new findings suggest these hunter-gatherers had domesticated pigs about 500 years earlier than previously thought, yielding new insights into the movements and interactions of prehistoric humans and the exchange of technologies and knowledge, scientists said.

The first humans in Europe were Neanderthals, an early human lineage that may have gone extinct there some 50,000 years ago. Their successors in Europe, modern humans, were hunter-gatherers that by the Mesolithic, or middle period of the Stone Age,were focused heavily on collecting and hunting wild game. [The 10 Biggest Mysteries of the First Humans]

Later on, incoming Neolithic or New Stone Age farmers who migrated to Europe from the south between 5500 B.C. and 4200 B.C. owned domestic plants and animals, such as sheep, goats, cattle and swine. Past research found that Mesolithic and Neolithic communities long co-existed.

Some communication apparently occurred between the Mesolithic hunter-gatherers and the Neolithic farmers, as suggested by pottery and other tool finds. However, the scale of the interaction and the extent to which hunter-gatherers took ideas from their neighbors remains hotly debated.

Until now, there was only circumstantial evidence of Mesolithic hunter-gatherer ownership of domestic animals other than dogs in continental Europe.

"Mesolithic hunter-gatherers definitely had dogs, but they did not practice agriculture and did not have pigs, sheep, goats or cows, all of which were introduced to Europe with incoming farmers [in] about 6000 B.C.," researcher Ben Krause-Kyora, an archaeologist and biochemist at Christian-Albrechts University in Kiel, Germany, said in a statement. "Having people who practiced a very different survival strategy nearby must have been odd, and we know now that the hunter-gathers possessed some of the farmers' domesticated pigs."

The scientists analyzed the ancient DNA from the bones and teeth of 63 pigs in northern Germany from a Mesolithic site known as Ertebølle and a number of Neolithic sites. They found that as early as 4600 B.C., the Mesolithic hunter-gatherers owned pigs that had both near-Eastern and European ancestry, which means they were domestic swine as opposed to wild boar.

"We address a long-standing debate in archaeology that has implications beyond northern Germany," researcher Almut Nebel, a molecular geneticist at Christian-Albrechts University, told LiveScience. "Our multidisciplinary approach can also be used to obtain information on cultural contact — for example, between hunter-gatherers and agriculturalists — for other areas of Europe and the world."

Genetic analysis revealed the domestic pigs had colorful coats and spots that likely would have seemed exotic and strange to the hunter-gatherers and may have attracted them to the swine.

"Humans love novelty, and though hunter-gatherers exploited wild boar, it would have been hard not to be fascinated by the strange-looking, spotted pigs owned by farmers living nearby," researcher Greger Larson at Durham University in England, said in a statement. "It should come as no surprise that the hunter-gatherers acquired some [of the pigs] eventually, but this study shows that they did very soon after the domestic pigs arrived in northern Europe."

Scientists are not sure whether the hunter-gatherers procured the pigs via trade or by capturing escaped animals. Still, given the close proximity of these two groups and how they occasionally exchanged artifacts, the researchers suspect trade for pigs was a more likely scenario than hunting of escaped domestic pigs, Krause-Kyora told LiveScience.

The scientists detailed their findings in the Aug. 27 issue of the journal Nature Communications.